A New Approach to CNC Turning

Appears in Print as: 'A New Approach to Turning' 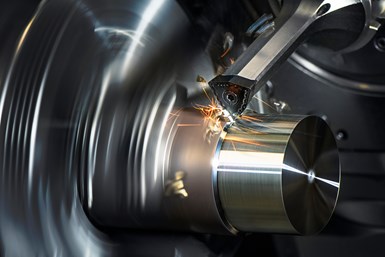 Ceratizit USA, part of Luxembourg-based Ceratizit Group, has developed an alternate approach to turning that it calls High Dynamic Turning (HDT), which, combined with the company’s dynamic FreeTurn tooling system, uses a turn-mill center’s B-axis milling spindle to perform the turning process. In contrast to conventional turning with an insert at a fixed angle-of-approach to the workpiece, this solution enables 360 degrees of freedom for the tool’s approach, and the point of contact in the machine can be varied during machining.

Ceratizit first showed the turning technology at a 2019 open house in Reutte, Austria, on an Emco Hyperturn 665 MCplus turn-mill. According to Dr. Uwe Schleinkofer, head of R&D cutting tools for Ceratizit Austria, HDT enables all traditional turning operations such as roughing, finishing, contour turning and face turning with just one tool.

Instead of the classic, static position of the cutting tool insert in a lathe’s toolholder, HDT uses a turn-mill’s B-axis milling spindle to alter the tool’s angle of approach to the workpiece in conjunction with the slim design of Ceratizit’s FreeTurn tools to minimize the risk of collision. Due to the tool’s rotation around its own longitudinal axis, the insert cutting edge in action can be changed at any point during the machining process.

All traditional turning operations can be performed with just one tool.

Additionally, the angle-of-approach is freely variable at any time during the cutting process. According to Schleinkofer, this concept enables the machining of undercuts, for example, by changing the angle-of-approach, in one setup. This not only provides flexible machining of various workpiece contours but also optimum chip formation, higher feed rates and an increased tool life, Schleinkofer explains. 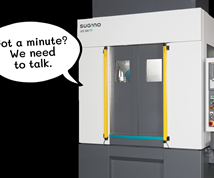 The Tool and Toolholder 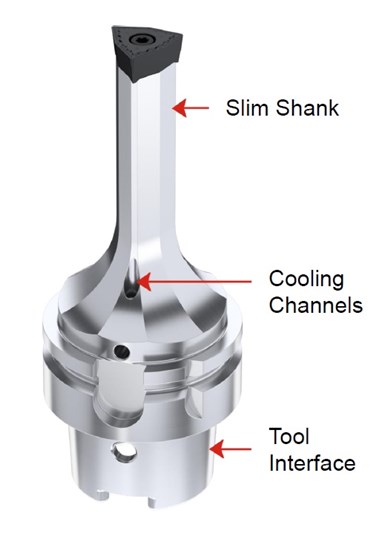 As the name suggests, in High Dynamic Turning static turning tools are replaced by dynamic ones such as FreeTurn. The defining characteristic of FreeTurn tooling is its simple structure. The toolholder, with its slim shank and axial concept (which optimizes the direction of the cutting forces into the spindle), is said to form a stable unit. The slim design enables machining in narrow workpiece contours right up to the chuck and cooling channels ensure coolant is supplied directly to the machining area.

At the top of the tool shank is a multisided insert that can consist of several cutting edge geometries with different properties. This enables different approach angles, corner radii or chip breakers as well as roughing and finishing operations in one tool. Different coatings and cutting materials are also available. The tool can, therefore, be adapted to specific machining requirements, offering the advantage of replacing several different tools. This, in turn, leads to significant savings not only with regard to the number of tools required to complete a part but also in terms of the requisite number of automatic toolchanger (ATC) magazine positions and tool changes.

During cutting, vibrations are avoided because the main cutting force is being directed axially toward the tool in the direction of the spindle.

To prove this point, Ceratizit demonstrated the HDT process live during the company’s open house event in Reutte. Two different parts were machined on an Emco Hyperturn 665 MCplus: A bike hub made from AlCuMgPb aluminum and a 42CrMo4 steel clutch shaft.

For the aluminum rotor hub, one tool was used for roughing (1,500 rpm, 2 mm axial depth of cut) and finishing (2,000 rpm, axial depth of cut less than 1 mm). Because the angle of approach could be adjusted during machining, all contours were machined in one setup (even undercuts, which cannot be realized with a standard 90-degree approach angle), and air cuts were eliminated because the tool cuts in both directions, top to bottom and vice versa. According to Schleinkofer, compared to conventional turning, four tools can be omitted and the cycle time was reduced from 2:10 to 1:35 minutes for this part.

The steel clutch shaft was machined using the same tooling. Roughing was performed with a cutting speed of 200 m/min and axial depth of cut of 3 to 5 mm. Finishing was performed at the same cutting speed, but at a lower depth of cut of 1 to 2 mm. These parameters can usually lead to high cutting forces, which in conventional turning can result in vibration. However, Ceratizit says that because the maximum main cutting force in HDT is directed axially toward the tool (in the direction of the spindle — see image below), vibration is minimized and the toolholding force is not exceeded, ensuring a stable process. 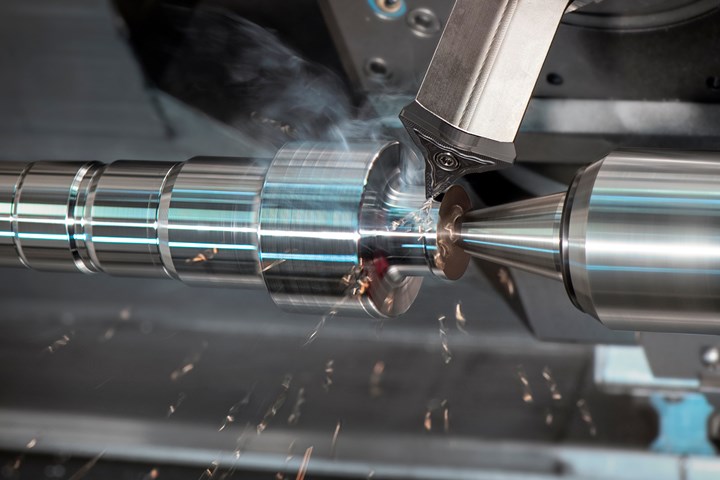 Here, a steel clutch shaft (42CrMo4) is shown being machined with High Dynamic Turning. Because the tool’s angle-of-approach can be adjusted during machining, all contours can be finished in one setup, including undercuts.