Improving Machinability in 303 and 304 Stainless Steel by Adding Copper

When added to 303 and 304 stainless steel, additional copper can reduce work hardening and permeability, provide corrosion resistance, and increase ductility and machinability.

Additional copper can improve the machinability of 303 and 304 stainless steel in a variety of ways.

U.S. firms that use T303 and T304 austenitic stainless steel alloys for applications such as fittings, bolts, screws, shafts and bearings will be interested in using improved versions of these alloys that are currently being used in Europe and Asia. These alloys from Ugine Stainless & Alloys, Inc. (Doylestown, Pennsylvania)—303UX (the U.S. designation) and 304Cu—are variants of 303 and 304 respectively with the addition of copper. The European EN 10088 spec is 1.4570 for 303UX and 1.4567 for 304Cu. 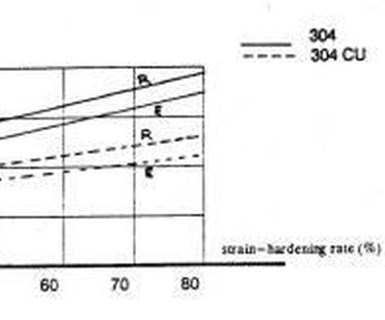 The AISI/EN chemistries of these alloys are compared to standard 303 and 304 alloys in Table 1. Note that there is no copper specification in the AISI T303 and T304 chemistries, which is an indication that any copper present is a residual element—one occurring naturally and not manipulated or added during the melting process.

The Benefits of Adding Copper to 303 and 304 Stainless Steel

Copper, when added to stainless steel, provides numerous benefits to the metal. It has been demonstrated that adjusting this element toward its AISI limits retards the work hardening rate and increases the ductility of the alloy. Increasing the copper content beyond the AISI limit decreases the work hardening rate even further. The cold work curve plotted in Figure 1 (304 alloy versus a 304Cu alloy with 3 to 4 percent copper addition), shows the extent to which the work hardening curve is retarded for the 304Cu as cold reduction increases. The elevated copper content also provides enhanced corrosion resistance, reduced permeability and better machinability.

Several current and older AMS/ASTM specs allow copper levels to a 1 percent maximum for typical 303 and 304 alloys, allowing mills to manipulate this grade up to the maximum. The 303UX and 304Cu stainless steels have copper levels well beyond the 1 percent maximum; therefore, they cannot be used as direct substitutes for T303 and T304. They can, however, be considered as an alternative that offers all of the performance of 303 and 304 in addition to increased machinability, enhanced corrosion resistance, reduced magnetic permeability and better ductility or bendability.

Having better ductility enhances these alloys in a couple of ways. First, the increased ductility permits using reduced machining forces, leading to faster machining speeds and reduced tool wear. Second, the alloys’ increased ductility help with bendability. That means there is less of a tendency for the alloys to crack during staking, swaging and cold-forming operations. Increased bendability in the 303UX can eliminate an annealing operation typically required when 303 is subjected to cold forming after machining.

This change in ductility is one factor that leads to increased machinability. Machining studies at Ugitech and customer experiences have shown that productivity increases of 30 percent or more can be seen using 303UX compared to 303XL alloy (and increases as much as 60 percent compared to the standard 303 alloy). Similarly, 10 to 30 percent increases for 304Cu compared to 304/304L alloy were also achieved.

The copper addition can enhance corrosion resistance, which is especially true in oxidizing acidic media. During the initial stages of corrosion, a chemical reduction of the copper leads to the formation of a metallic film on the metal’s surface. This metallic film directly protects the material from the corrosive media and stabilizes the potential in the favorable zone corresponding to the chromium passivity. Finally, it has been shown that this copper film reduces the corrosive potential of the reduction of positive hydrogen ions in the acidic media.

Additional studies in other corrosive media have shown that the increase in copper does not reduce the initial formation of crevice or pitting corrosion. However, it slows the growth of the pits and crevices.

One last consideration is weldability. Where welding is concerned, the high copper 303UX and 304Cu alloys are directly comparable to their conventional 303 and 304 counterparts. There is no known negative affect of copper in the weld zone or in the weldability of these alloys. They can be welded with the same techniques as T303 and T304 to yield the same results. Bear in mind, however, that all stainless steels with high sulfur content are difficult to weld, and alternative joining methods should be considered.

Remember that small additions of copper can enhance material performance, while maintaining mechanical properties of the AISI grades. Today, companies are concerned about cutting costs wherever possible. However, when it comes to specifying stainless steel alloys, most tend to select from the familiar set of traditional alloys instead of considering all of the possibilities. American manufacturing designers rely too heavily on American AISI, AMS and ASTM grades. They fail to consider newer offerings that can provide the same, if not better, performance characteristics and offer increased opportunities for reducing manufacturing costs.

Europe and Asia have enjoyed these alloys for many years and have been able to reduce costs without compromising part performance. The United States should start taking a serious look at these alloys to help reduce part costs and remain a viable player in today’s market.