Growing a Job Shop into a Full-Service Manufacturer

By maximizing employee satisfaction, adding fabrication and other services, and always keeping open machine capacity, Square Deal has grown from a seven-person job shop to a full-service manufacturer that employs hundreds. 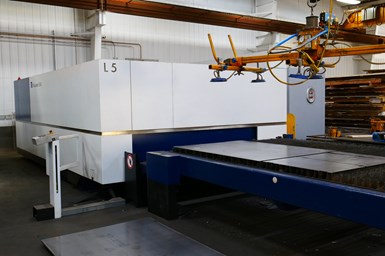 Square Deal started as a small machine shop, but in the past 25 years it has added fabrication processes including welding, forming and laser cutting. This has enabled the company to provide its customers with complete machining.

When Joe Morgan took over Square Deal Machining 25 years ago, the company had seven employees that ran job shop-type work on a few CNC lathes and VMCs. Since then, he has grown the company to employ hundreds of people, performing just about every machining service its diverse customer base needs, including machining, fabricating and assembly.

Morgan says several strategies have enabled the company to reach this point. According to him, a shop’s most valuable resource is its employees, so figuring out how to manage and develop them is essential to growth. To this end, the shop’s layout and training systems are designed to maximize employee satisfaction. Having a wide range of machines enables the company to work for a wide range of industries and meet most of its customers’ manufacturing needs. And having open capacity to quickly respond to customers ensures the company has the ability to take on new opportunities to drive growth. The shop’s recent purchase of six new machines has increased the shop’s efficiency and capacity, enabling it to stay flexible enough to respond to changes, including ones brought on by the coronavirus pandemic. 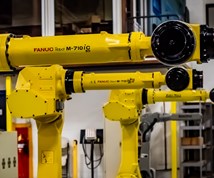 A Company’s Most Valuable Asset

By providing services like laser bending, Square Deal Machining can serve as a complete manufacturer for its customers. “We try to make it as easy as possible for our customers to do business with us,” owner Joe Morgan explains.

Square Deal Machining was originally founded about 75 years ago to support IBM, whose headquarters at the time were in Endicott, New York, about 25 minutes from Square Deal in Marathon, New York. Fifty years later, Joe Morgan stepped in to purchase the business so the owner at the time could retire.

Morgan has a background as an accountant, but his father owned a metal finishing company, which is how he met the previous owner of Square Deal. He says his accounting background has been essential in making this growth possible. It “comes in handy every day” as he devises Square Deal’s response to market changes, enabling it to remain competitive in a worldwide economy where high-volume work is often offshored. “You have to have high quality and low price points if you want to survive anymore,” he explains.

This requires increasing productivity to account for increasing labor costs, a feat Morgan has accomplished by adding automation and faster machines, and organizing the shop floor to reduce material movement and allow employees to run groupings of multiple machines. He refers to these groupings as “untraditional” machining cells. In addition to machines being grouped by equipment and job types, machinist skill level is taken into consideration. “The biggest asset any company can have right now is your people, and your people are what’s going to help you survive and make the future. So figuring out how to utilize everybody’s skill levels and continuing to develop and enhance those skill levels is the biggest challenge,” he explains. “Anyone can buy equipment. Equipment’s easy to buy. It’s hard to get the skill level to run the equipment to the efficiency it’s designed for.”

“Anyone can buy equipment. Equipment’s easy to buy. It’s hard to get the skill level to run the equipment to the efficiency it’s designed for.”

Square Deal upskills its employees by both bringing equipment suppliers into the shop to conduct training and sending employees out to suppliers for training. In fact, training is so important to Square Deal that it’s a major factor in its equipment purchasing decisions. “We try very hard to pick suppliers and partners where training comes with the equipment.” For one of its most recent purchases, the training started before the equipment had even arrived. “Before the machine even hit the floor, we had people go to Okuma for onsite training. Things like that, I think, are critical for success,” Morgan says.

Square Deal Machining recently purchased six new machines, including its first five-axis machine, to increase its efficiency and capacity. This has given the shop the flexibility to respond to changes, including ones brought on by the coronavirus pandemic.

Another way Square Deal has been able to grow is by adding machining capabilities. Currently, the shop does machining, fabricating, forming, welding, laser cutting and assembly. This enables it to work for customers in a broad scope of industries. The exception is automotive work, which the shop isn’t currently doing, but it does do work for other transportation sectors, as well as electronics, medical, aerospace and construction, to name a few.

“We try to make it as easy as possible for our customers to do business with us, meaning we try to cover all of their needs.”

To perform all of these machining operations, Square Deal requires a wide range of equipment. The shop currently has flat lasers, tube lasers, forming machines, welding equipment, horizontal machining centers, vertical machining centers and turning centers. And as the company continues to grow, it continues to add more machines. According to Morgan, when a machine starts getting to 60% capacity, the shop starts looking for more equipment. “We used to use the theory that 80% is when you need more equipment,” he says, “but if you wait until you’re at 80%, I think you’ll find out you’re in a lot of trouble before you could get new equipment in place and people trained on it.”

In late 2019, it was time for the shop to add new equipment in several areas. It added its first five-axis machine, a horizontal machining center, a vertical lathe, a twin-spindle lathe with live tooling, and two new saws, all at nearly the same time. “It wasn’t supposed to be that way but that’s how they arrived,” Morgan says. “Some machines showed up early and one machine showed up late, forcing everything to happen at the same time.” Morgan says this actually worked out to the shop’s benefit, as it helped simplify the reorganization of cells to fit the new equipment. One existing cell was rearranged to include the five-axis machine. The addition of the cold saw also enabled the shop to eliminate an existing saw, freeing up space to set up a new cell with the new lathes.

Square Deal chose these machines because they could improve efficiency,

This circular saw was one of the six machines the shop recently added. Not only does it work quickly, but it can also run unattended for hours at a time.

provide better turnaround times for new projects and prevent future bottlenecks. For example, the shop added two new saws, including its first cold saw, a Hydmech CSNC-125. “Sawing seems to always get overlooked, and we decided to invest heavily in our sawing area to improve efficiency,” Morgan explains. He says the new cold saw is fast (it can cut a piece of 2" round solid in two seconds), can be set up quickly and run unattended for hours at a time. This helps the shop respond quickly to new orders from customers.

Several of the other new machines have helped increase efficiency by reducing secondary operations for complex aerospace work that requires very tight tolerances. The shop’s first five-axis machining center, a Haas UMC-750SS, is now running work that used to be machined on three- and four-axis machines. “We’re capable of machining more and more parts without taking them in and out of the machine or a vise,” Morgan says. This has increased throughput of the parts going across this machine by about 25%, according to his estimates.

The new Okuma Genos L3000-E live-tooling, twin-spindle lathe has produced similar results. Although this isn’t the shop’s first twin-spindle lathe with live tooling, the others were over capacity, so the shop had to start some parts as sawed blanks and machine them on both a lathe and a machining center. With the extra capacity of the new lathe, the material can be fed through a bar feeder, and the parts come off the machine complete. Morgan estimates that the throughput of parts on the new lathe has increased between 10% and 50%.

Because its other twin-spindle, live-tooling lathes were over capacity, the shop also added a new Okuma Genos L3000-E. With the help of a bar feeder, throughput of parts on this machine has increased between 10% and 50%.

A Plan for the Future

Shortly after Square Deal’s new machines arrived, the coronavirus pandemic hit, creating uncertainty in many end markets. According to Morgan’s estimates, about 25% of the shop’s customers are busier, and 75% are experiencing a slowdown. He adds that while he believes that all of its customers will survive the downturn caused by the pandemic, he does see it being difficult for many of them.

As for his shop, Morgan believes its diversity of capabilities and customers, along with the added capacity of the new machines, will put it in a stronger position to respond quickly to market changes. “In fact, the new machines played a key role in the last couple months,” he says. One of Square Deal’s competitors, with whom the shop shares a customer, was forced to close during the stay-at-home orders many states issued in early 2020. As a critical manufacturer, Square Deal stayed open and stepped in to help the customer, increasing production of certain parts. And when the other vendor was able to reopen, Square Deal stopped running the additional work. “It wasn’t our intention to take that work on a permanent basis,” he explains, “but it was our intention to help the end user, the OEM, do its best to survive as we all made adjustments.”

Despite the economic uncertainty, Morgan is forging ahead with his plans for the company’s future. The shop is in the process of adding more welding capabilities and certifications beyond its current AS 9100. After that, “I think my next purchase won’t be more equipment,” he says. “I’ll be looking to acquire other companies in the same industry.” This isn’t new territory—Square Deal has acquired three other companies so far. The first was the fabrication shop in 2000, followed by a facility that focused more on machining, and then another company that primarily did fabrication work. As for the next acquisition, Morgan doesn’t know yet if it’ll be machining or fabricating, but he says he’ll be looking to make a move in the next 12 months.