Inside the Sinker EDM Process, One Spark at a Time

Successful sinker EDM operations rely on understanding the relationship between each individual spark, the electrode and the workpiece.

It is not only our own vision that is incapable of isolating spark generation in the sinker EDM process. Most cameras cannot keep up with a production rate of up to 30,000 sparks per second, which, believe it or not, happens one at a time. Photo: Adam Wysuph, MC Machinery.

The frame rates per second (fps) for movies and television are typically standardized at 24 and 30 fps, respectively. Because each frame moves too quickly for humans to visually isolate, we perceive the collection of individual frames as a continuous moving picture. 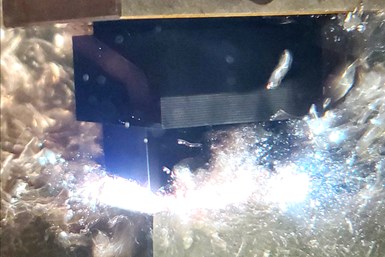 Every EDM operation begins with a central question: Which waveform will best produce the desired result? The answer, of course, depends on the workpiece material. The conductivity of different metals, as well as their ability to absorb heat, are key determining factors. Photo: Adam Wysuph, MC Machinery

A similar illusion is at work with sinker electrical discharge machining (EDM) equipment, featured in the image above. Of course, the EDM process involves metalcutting via electrical discharges, or sparks, between an electrode and the workpiece in a dielectric liquid. The sparks produced by the sinker EDM process — anywhere from 500 to 30,000 sparks per second — seem to appear simultaneously. In truth, these rapid-fire sparks are produced one at a time. If we cannot isolate a frame of moving film, clearly the EDM process is far too fast for us to keep up with what is happening before our eyes. 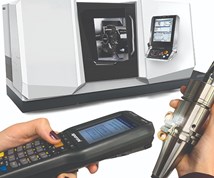 While our perception betrays us, it is still important that we understand this fact in order to properly control the EDM process.

Understanding and optimizing sinker EDM was the premise of a technical presentation given by Pat Crownhart at MC Machinery Systems’ open house this past fall. Mr. Crownhart is the company’s sinker EDM product manager — a title that short-shrifts his deep expertise on the electromechanical functions taking place during an EDM process. Since Mr. Crownhart’s presentation left most of his audience in the dust after just a few slides, I touched base with him recently to get a better understanding of what he considers to be the central tenets of sinker EDM technology.

Think of each EDM spark that is discharged as a shovel of material removed from the part. The conductivity of different metals as well as their ability to absorb heat are key determining factors for the type of “shovel” that should be used. Image: Pat Crownhart, MC Machinery

“Think of every EDM spark that is discharged as a shovel of material removed from the part,” Mr. Crownhart says. The sizes and shapes of the shovels — each designed to perform a specific task — can be controlled by manipulating how electrons travel across the gap between the electrode and the workpiece.

Every EDM operation begins with a central question: Which waveform — or which shape of shovel — will best produce the desired result? The answer depends on the workpiece material. The conductivity of different metals as well as their ability to absorb heat are key determining factors for the type of “shovel” that should be used.

Mr. Crownhart says that the most common shovel shape, the square waveform (referred to as the transistor pulse or TP waveform on EDM machines made by Mitsubishi Electric, which owns MC Machinery Systems) is used for as much as 90% of sinker EDM work due mainly to its versatility across a range of materials. Square waveforms produce a lot of heat by ramping up the amperage quickly. Since EDM equipment in the United States typically features graphite electrodes that are capable to withstanding high temperatures, most of these machines use the TP circuit for day-to-day operations.

If the amperage waveform represents the EDM shovel’s shape, voltage can be likened to its handle — how long can the shovel reach? Voltage initiates the spark, but if it takes too long to do so because of electrode contamination or other reasons, the efficiency of the EDM process drops. The machine makes small servo adjustments to location each time a spark is produced, and changing voltage parameters — i.e. changing the gap length between the electrode and the workpiece — will impact the operation, for better or worse. “When you change the gap, you change how far that spark will travel,” Mr. Crownhart says. “You can safely change voltage to a certain degree, but because so many adjustments are being made so quickly, you need to understand the role voltage plays or risk ruining the part.”

Modern sinker EDM equipment makes small adjustments with the servo each time a spark is produced. Changing voltage parameters — or the gap length between the electrode and the workpiece — will impact the operation. Image: Pat Crownhart, MC Machinery

Polarity, which for our purposes we’ll describe as the travel direction of the electrons, is another central variable within sinker EDM operations. Before adaptive control became available and then advanced on machines like Mitsubishi Electric’s new SV series, many older machines utilized negative polarity. Without adaptive control, if a direct current does not turn off and instead produces a long spark, you risk damaging your workpiece. Negative polarity induces a fast burn rate (and is still the best option for titanium and some exotic metals), but damage from electrical shorts typically impacts the electrode rather than the workpiece. Positive-polarity sparks — when the electrons flow from the part to the electrode — typically produce less wear on the electrode.

Sparks Are the Enemy

While it may be counterintuitive, sparks are the enemy of the EDM process. Sparks represent heat, and “if you’re just heating it up, you’re really just using a welder,” Mr. Crownhart says. The higher the amperage and the longer the on-time, the more heat that is produced with each discharge. While faster burn rates produce more heat, heat in excess can cause particles to grow on the electrode. In turn, this contamination, or swarf, causes the machine to spark in the same spot continuously, resulting in a poor finish or causing damage to the workpiece. 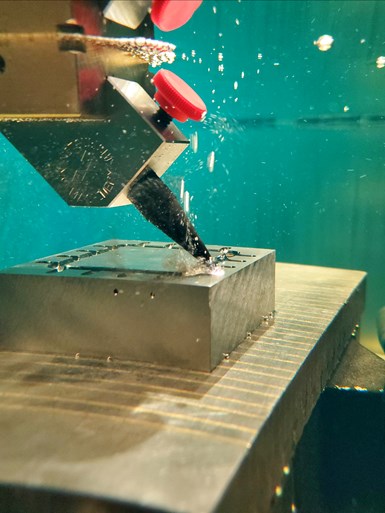 “That's why the old adage of EDM was flush, flush, flush,” Mr. Crownhart says. “It is because in the olden days when the electronics weren't as advanced, it was really important that your contaminants were being broken up and that pressurized fluid was being brought in.” Modern power supplies react to inconsistent sparks and add extra time to allow for cooling, but contamination is still a major consideration with sinker EDM technology. “You can only machine as fast as you're moving contaminants,” Mr. Crownhart says.

Taken together, these may be basic points to experienced EDM users. But Mr. Crownhart says that he has encountered many users who run EDM purely based on what has worked in the past, without necessarily understanding why a certain setting worked. “It is possible to be more predictive than, ‘This has worked for me in the past so I’ll try it now,’” he says. “With that mindset, you’re just tinkering with settings until you get something to work. The better you understand the process, the faster you can get to the most optimized settings for your job.”