After years of relying on an extensive machining cell for part production, this marine equipment manufacturer has now reduced part handling and improved quality through use of single-setup lathes and automated loading and unloading.

As the pride of the Badger state, Mercury Marine is locally known simply as “Merc.” The 81-year-old roots of this American icon give it a rich history, making it the pride of the community and a favorite of the boating public. Meanwhile, its success makes Merc the envy of its competitors. Mercury Marine is a world leading manufacturer of all types of marine propulsion systems—a $2.6 billion division of Brunswick Corp. that employs more than 5,200 people in multiple locations around the world. 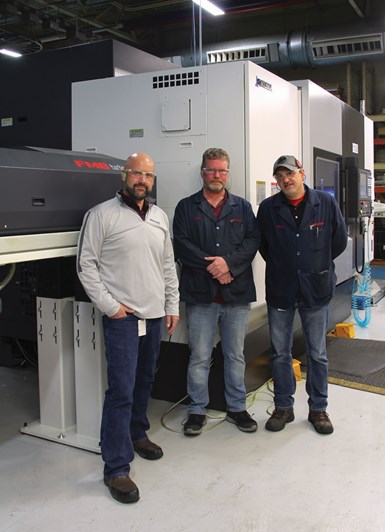 Jason Noworatzky, Bill Cusick and Chris Erke (L-R) are part of the team that produces all of the gears and shafts for Mercury Marine's inboard and outboard drives used worldwide.

More than 80 years of innovative boat engine development has left the Fond du Lac, Wisconsin, location an extremely well-known repository of engineering prowess and production excellence. Today’s sprawling campus alongside Interstate 41 features more than 2.5 million square feet of space that contains all manner of engineering and manufacturing disciplines along with the approximately 3,300 individuals that make it all happen.

In Plant 4, all the gears and shafts are produced for all of Mercury Marine’s inboard and outboard drives manufactured in its plants around the world. This massive undertaking includes prop shafts, driveshafts, steering shafts, forward gears, reverse gears and pinions for all MerCruiser inboard and sterndrive engines, MerCruser Alpha and Bravo sterndrives, Mercury diesel engines and diesel sterndrives, the Mercury SportJet, and all outboard motors. The man responsible for the team of manufacturing engineers, industrial engineers and programmers required for this weighty task is Jason Noworatzky, Plant 4 engineering manager. For everything that has to do with the process of manufacturing shafts and gears, Mr. Noworatzky and his team create and establish the manufacturing and quality procedures along with the capital expenditures needed to produce the parts efficiently and, most importantly, to meet Mercury’s stringent specifications. Next, they select the best machinery and automation based on speed, labor cost and part perfection. “Quality—we build the process around that,” Mr. Noworatzky says.

This section of steering shaft for the company's outboards was originally produced in a five-machine cell with two operators, but now is handled by a two-turret, two-spindle lathe that is combined with a bar feeder and an unloader.

One component that was particularly labor intensive is a hollow section of steering shafts that are used in Mercury Marine outboards. The previous process was a multi-machine cell. Starting the process was a single-spindle lathe with a single turret and a tailstock with a bar feeder. It would then get transported to another machine for a drill press operation. Next, parts were moved to another machine for a centerless grind operation, and then transported to a final hobbing operation. This part production method was employed for decades. “I’ve been here for 25 years, and it was always done that way,” says Bill Cusick, manufacturing engineer. That previous multi-machine cell process used two operators.

Eventually it became apparent that the machines in these cells would need to be replaced. Looking for a modern solution, Mr. Cusick investigated new and modern machinery. “The technology finally caught up so we could now employ all the processes in one machine,” Mr. Cusick notes. “We no longer had to run them on the old hobbing machines.”

Chris Erke, senior programmer, weighs in on the quality issue. “It’s difficult to hold true position and runout going from one machine to another instead of doing it all in one machine where you can control it.”

“A big portion of this move for us has been quality,” Mr. Cusick says. “That means done in one machine.” The team had to do a fine balancing act between machine capacity and capabilities, number of machines and the projected production requirements. After creating a sort of scoreboard, one solution won out. Mr. Cusick went to the company’s trusted local machine tool dealer, Morris Midwest, and started a dialog concerning the replacement of the old five-machine cells. “We created an SOW (Statement of Work) that explained that we wanted a lathe that will do our machining process complete,” Mr. Cusick says. “We had a pretty good idea about what we thought it would entail to get the cycle time needed when adding the additional operations.”

Mr. Cusick and Mr. Erke relayed to Morris Midwest that they believed that a lathe with two turrets and two spindles, combined with a bar feeder and an unloader, would work. “With the new technologies, we didn’t think it would be an issue to produce it so it goes in one end and comes out done,” Mr. Erke remarks. “We pretty much knew how to do it complete, but Morris Midwest selected the proper machine, did all the engineering and handled all the runoffs.”

In 2017, the first new bar feeder/lathe/unloader combination cell was delivered to Plant 4. Because of its size and capabilities, the new Okuma LT3000 EX was affectionately dubbed “Frankenlathe.” Soon after, a second cell (an exact duplicate of number one) was positioned next to the first and was quickly referred to as “Bride of Frankenlathe” by shop personnel.

Three Okuma LT3000 EX lathes, with bar feeders and unloaders, were added to handle the production of the shafts.

The “Frankenlathes” are both flanked by Edge Technologies’ machinery that makes the process a true one-and-done technological advantage. The automation employed in this current setup was the missing piece needed for producing the part “one-and-done” with the quality required. The Okuma LT3000 EX is an open-architecture-type lathe, a highly flexible twin-spindle turning center in the 8-inch chuck class. This multi-function horizontal twin-spindle machine integrates lathe and mill/drill functions on all turrets.

The first two cells were equipped with FMB Turbo 5-65 bar feeders. These are magazine-style units that feed bars as long as 12 feet and feature oil-filled channels that create a hydrodynamic bearing effect around spinning bars for smooth running. The magazine storage capacity is 11 inches on the standard units. With the part length and cycle time for this shaft section, the Okuma can process quite a bit of linear feet of tubing during a shift, so Edge Technologies added the Edge BarLift, an extended magazine loading system that features an additional 28 inches of stock for longer running without the operator needing to hand-load the feeder. 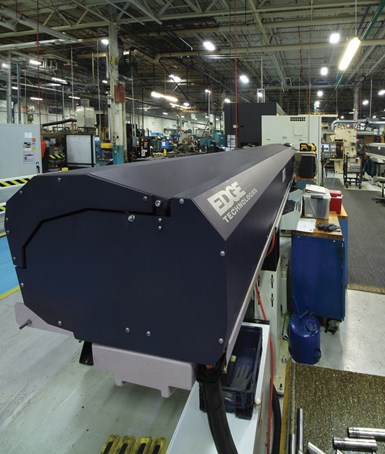 “We may have had one or two lathes that had an unloader on them in the past, but this is by far the biggest step on the most mainstream product that we have done (an unloader) on,” Mr. Noworatzky says. “We can’t drop this part because it would damage the splines. The completed part has surface finish requirements.”

Cells one and two were installed in 2017 and were equipped with Edge Technologies’ FleXsys LE (Load/Extract) units for the part unloading process. This unit is designed for automation on larger parts—specifically long-shaft jobs. It is designed to feed and retract bar stock cut to part length—as large as 2.5 inches in diameter and 37 inches long—for production with single-spindle CNC lathes. The 12-foot tube stock is fed into the Okuma’s main spindle with the FMB Turbo 5-65.

Frankenlathe 3: The Rise of Automation

The third cell arrived in late 2019 with the new Rebel 80 Servo Unloader, Edge Technologies’ most recently developed automatic part removal system for extracting parts in a diameter range of 8 to 80 mm. This is a more versatile unit than the previous version that is running on cells one and two. The older units did not have a control system that would communicate with the lathe as the FMB bar feeders do. Additional programming of the FleXsys LE was required. Although the units ran well once they were tweaked in, Mercury Marine asked Edge Technologies to provide an updated unloader configuration that would fix this shortcoming. The development of the Rebel 80 Servo Unloader was the answer. Edge had been working on the new unloader and made the communication issue a main priority for the Mercury installation. Now, on the third cell, the Okuma LT3000 EX, the FMB bar feeder, and the Edge unloader all communicate and function as one machine with Industry 4.0-type optimization.

While the first two lathes were equipped with FleXsysLE unloaders, designed for automation on larger parts, the third Okuma has the Rebel 80 Servo Unloader, which is designed to extract parts ranging from 8 to 80 mm diameter and features optimized communication capabilities with the bar feeder and machine tool.

The Rebel 80 Servo Unloader features several ways to remove parts with various methods of attaching the extractor to the part for pulling it from the subspindle. These devices are known as end effectors. The available end effector mechanisms include bar collets for OD gripping, expansion ID grippers, three-point OD grippers, feed fingers, angular grippers, electromagnets for ferromagnetic materials, and special engineered solutions for profiled and odd-shaped stock.

To protect part finishes, in the case of the splines on the steering shaft, the extraction V-tray softly places the shafts on the magazine’s surface, which is covered with a non-metallic material. The incline table is adjustable, enabling the unloader to “easy unload” large-diameter parts.

The Rebel 80 Servo Unloader features an axial shift track that allows for the unit to easily slide away from the lathe for spindle liner changes and maintenance access to the back of the lathe. It comes equipped with a remote-control pendant and a conversational control that features a touchscreen and menu-driven programming. The control also stores unlimited part programs.

The third cell benefitted from an advancement in bar-feeder technology as well. The FMB Turbo 5-65 came equipped as an A model, featuring the new auto-adjust guide channel system. The polyurethane guide channels automatically adjust to the proper diameter, allowing one guide channel to run bar diameters from 5 mm to 65 mm. This feature gives Mercury Marine the ability to quickly change to different shaft diameters with no guide channel set changes. This design aids in quick setups for just-in-time production.

Along with the increase in part quality, these cells give the advantage of reducing labor costs and offer a better use of floor space. Ideally Mr. Noworatzky would have a blank slate to reconfigure his production floor as he wishes. He explains that the two things that drive his team are combining operations and trying to share labor.

Going forward, Mr. Noworatzky feels that adding automation such as the bar feeders and unloaders that have been employed with these lathes will be the norm. “I don’t foresee any new cells coming in here from now on that don’t have some type of automation. Whether it’s a FANUC robot, a gantry system, a bar feeder, or unloaders.” He predicts it will be something to minimize the amount of labor that’s required to do a job. “Labor is a premium,” Mr. Noworatzky concludes.

Because of the higher technical expertise required to operate cells such as these, Mercury Marine offers classes to staff to upgrade their skills. “It does require you to have a higher level of operator,” Mr. Noworatzky says. To accomplish this, Mercury sends its operators to a local community college where they enroll in level 1 and level 2 machining courses. Once completed, they can test to receive NIMS certification.

Kevin Shults is an advertising and design professional. He has 24 years of experience in the machine tool industry, the last 20 of which he served as the director of marketing for an OEM within the precision machining industry. Contact Mr. Shults at shultscomm@yahoo.com.