The SwissNano from Tornos is a Swiss-type lathe capable of manufacturing complex micro-parts in a single setup and at a high volume.

The central challenge of micro machining is that the margin of error shrinks as the parts get smaller. Scrap is a problem for every manufacturer, but the line between safe and scrap is far thinner in a part with a 3-mm diameter. Additionally, smaller parts still require complex features, but the machinist has less room to work with, and this makes achieving the precision necessary to machine complex parts much more difficult.  Moreover, the cutting tools themselves are incredibly small and often easily broken or damaged during machining.

With these difficulties adding up, it can be frustrating to design toolpaths for micro-applications, especially on machine tools that are not designed with micromachining in mind. 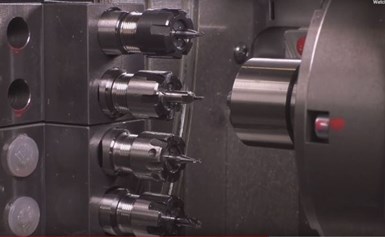 The counterspindle for the SwissNano enables the user to perform more operations on parts, including thread whirling.

According to Philippe Charles, Head of Product Management, Swiss-Type for Tornos, micromachining applications depend less on the power of a machine tool than macro-parts do. “In this small world, we do not need machines that deliver high power or torque to cut the material,” he says. “Instead, we must concentrate on precision, thermal behavior and repeatability.” The high speeds and feeds that make larger applications profitable simply do not provide the same value to micro-parts. Instead, machinists need to design micromachining applications to prioritize accurate passes and reduced strain on the cutting tool.

Of course, the difference between making the part and making a profit depends on one thing: productivity. Many machines are capable of manufacturing micro-parts, but it can be difficult to do so at a high enough rate of production to be profitable. That’s where repeatability comes into play, according to Charles. To fill this need, Tornos made the SwissNano, a Swiss-type lathe designed for micromachining with a tiny 0.7-square-meter footprint.

Designing With Micromachining in Mind 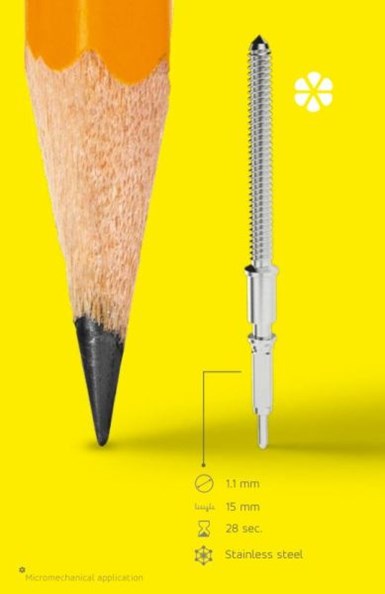 The SwissNano is able to use up to 12 different tools to produce incredibly complex parts on a micro scale.

Originally designed with Swiss watchmakers in mind, Tornos designed the SwissNano around the need to produce complex micro-parts in high volumes. One of the key design features of the machine is its small work area. “Compactness is one of the keys to reaching the targets of high precision and repeatability,” Charles says. “The axis strokes are quite short to avoid thermal issues, as it reduces the ‘heating time’ of the machine during production of big batches.” Poor thermal management can reduce the stability and precision of the machine. Additionally, the short axis strokes also reduce idle times, making the size a boost to productivity as well.

Of course, the SwissNano offers more than just precision and productivity: It can also produce highly complex parts. The machine benefits from a high level of variability in the tools it can bring to bear on any given part. With 12 different tools equipped on two different tool systems at any given time, the machine is capable of thread milling, thread whirling, gear hobbing, turning, drilling, milling and deburring in a single setup. With the counterspindle, the machine can produce complete parts that undergo numerous operations on all sides without the need to transfer or pause for tool changes, and the bar feeder ensures numerous parts can be produced in a single setup.

Micromachining for Medical and Dental

The work area of the SwissNano includes two spindles and up to 12 tools in an accessible workspace.

Both versions of the machine have been designed to have accessible work areas. “We put a lot of effort into the ergonomic design,” says Charles. “It’s really important on the setup side to have good accessibility in the machining zone in order to quickly change cutting tools or attachments.” To accomplish this, Tornos designed the door to the machining area as a large, clear quarter-dome. It provides an excellent view of the work area, and it enables the operator to have easy access to the tooling.

The SwissNano is capable of turning, milling, hobbing and thread whirling in a single setup, as his video shows.

The SwissNano is one of the few options for micro-manufacturing that combines precision and high production capacity with the potential for manufacturing complex parts in a single setup. The fact that it does this while boasting the smallest footprint in the market is icing on the cake.

Learn more about the SwissNano. 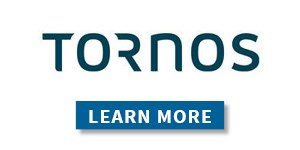 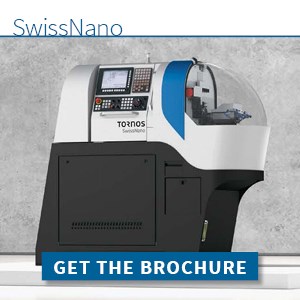