SurfaceTechnology Germany is now rescheduled for June 21-23, 2022, in Stuttgart. The SurfaceTechnology area will also be part of Hannover Messe in April 2021. The parts2clean trade fair will return to Stuttgart Oct. 5-7, 2021.

Organizers for SurfaceTechnology Germany and parts2clean have decided to cancel the events for this year. Both trade shows were scheduled to take place October 27-29 in Stuttgart, Germany.

SurfaceTechnology Germany is now rescheduled for June 21-23, 2022, in Stuttgart. The SurfaceTechnology area will also be part of Hannover Messe in April 2021. The parts2clean trade fair will return to Stuttgart Oct. 5-7, 2021.

Beware of False Unemployment Claims Filed with Your Information 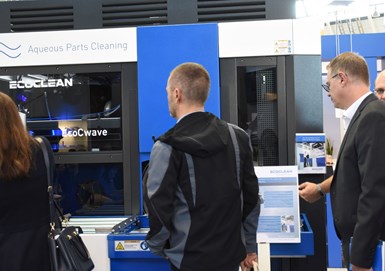 The events were cancelled due to the uncertainty caused by the coronavirus pandemic, including extensive restrictions and hygiene regulations for holding trade fairs in Baden-Württemberg, as well as limitations on international travel. The decision was made by the organizers in coordination with the trade fair advisory boards.

“We fought hard for both trade fairs, but, in the end, there's no alternative to cancellation,” says Olaf Daebler, global director of SurfaceTechnology Germany and parts2clean in the team of Deutsche Messe AG. “Under the given circumstances, it would not have been possible to successfully stage the two trade fairs in Stuttgart in October.”

Daebler cited the need for companies to have reliable planning, which called for a prompt decision. “We will now invest all of our energy in restarting parts2clean in October 2021 and SurfaceTechnology Germany in June 2022,” Daebler says. “Once the current situation has been overcome, both events will be needed more than ever.”

Organizers took part in numerous conversations with companies and associations, which led to the decision. Feedback indicated that, due to the economic crisis, some companies are struggling to survive and dealing with other more immediate concerns rather than planning on attending trade fairs.

Feedback also centered on the issue of health and protection against infection. Whether for business or private reasons ‒ much of the population is minimizing travel and contact. International travel is especially more difficult, according to organizers. Furthermore, hygiene concepts and political guidelines for holding trade fairs would have significantly affected the usual appearance of the events. For trade fairs in Baden-Württemberg, for example, plans permit one person per 10 square meters in each exhibition hall.

It was a visitor survey last week that finally led to the cancellations. According to this survey, around 60% of the previous visitors of SurfaceTechnology Germany have either excluded or at least questioned a visit under the current circumstances. For parts2clean, this figure is higher at 65%.

SurfaceTechnology Germany was originally scheduled for June 2020 and had already been postponed to the autumn. For exhibitors of both trade fairs and visitors who had already purchased  tickets, details will soon be available on the trade fair websites — parts2clean.de/home and surface-technology-germany.de/home.