Here’s a chance to help preserve industrial history as the museum develops new exhibits explaining the beginning, evolution and direction of U.S. manufacturing. 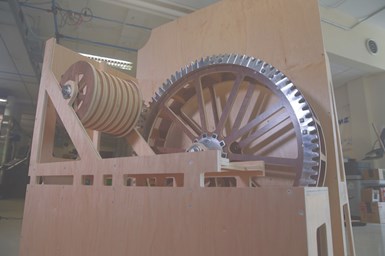 Recently, Mastercam partnered with Haas Automation to create this waterwheel display for the American Precision Museum demonstrating how running water was turned into power to drive the building.

Windsor, Vermont’s American Precision Museum (APM), which occupies the former Robbins and Lawrence Amory built in 1846, was established to preserve the heritage of U.S. manufacturing. In celebration of that building’s 175th anniversary in 2021, the APM is designing new exhibits that are accessible in person and on digital platforms in what it calls “Looking Back to Face Forward.” Displays explaining how machine tools were developed in the creation of interchangeable parts for mass production (initially for rifles) will be combined with hands-on workshops and camps with both traditional and modern equipment to enable young people to understand they can have successful careers in manufacturing.

If you’ve never visited the APM, you can get a glimpse of it by viewing an IMTS spark video in which Stephen LaMarca, manufacturing technology analyst for AMT — The Association for Manufacturing Technology, gets a personal tour.

Consider donating to the museum’s effort and/or becoming a member.