An Australian company has been able to speed delivery of its popular plumbing products to U.S. customers by adding machining and assembly cells to produce brass fittings in Alabama. 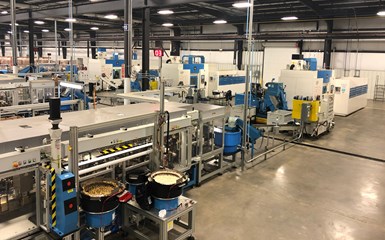 You DIY-ers out there might know about SharkBite, a push-to-connect plumbing solution for home repair work, remodeling and new construction as well as water heater installation. Those products are available at big-box outlets such as Home Depot and various plumbing supply stores all over the country.

Say a copper pipe in your house breaks. Instead of soldering a connection inline, you’d simply insert either end of the pipe into a SharkBite fitting, resulting in a secure, leak-proof connection without having to break out the propane torch, solder and flux. 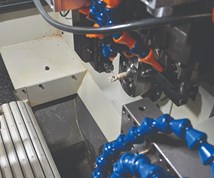 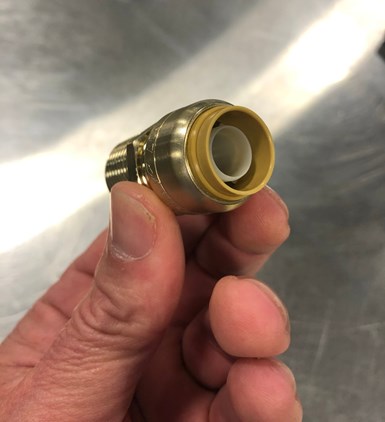 Push-to-connect fittings enable pipe connections to be made without using traditional soldering methods.

SharkBite is a brand of Reliance Worldwide Corporation (RWC), a leading global manufacturer of water control systems and plumbing solutions for residential, commercial and industrial applications, headquartered in Australia. What you also might not know is that, until recently, all SharkBite products have been manufactured in Australia. A few years ago, though, RWC added machining capability in Cullman, Alabama, to better support high demand from the U.S. market.

A big part of this is three machining and assembly cells producing three versions of straight, 0.5-inch-diameter fittings. With these cells, silicon-brass barstock enters the cell through Gnutti Double Front 50 multispindle transfer machines and what exits, at a rate of thousands per day, are machined, cleaned, assembled and inspected fittings ready for packaging.

RMC entered the U.S. market in 2002 with the acquisition of the plumbing portion of the Cash Acme business, which was the world’s highest-volume temperature and pressure valve manufacturer. The company moved that operation from Illinois to Cullman where its current expansive campus features multiple facilities used for warehousing, distribution and manufacturing. 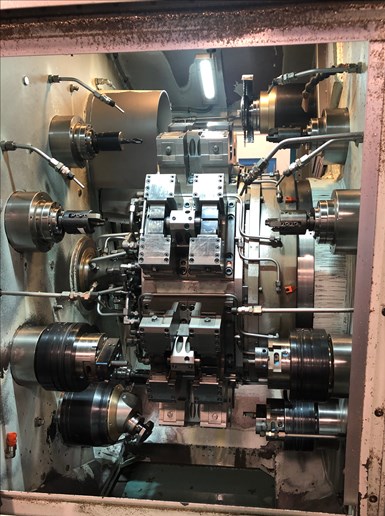 The Double Front 50 machines feature 16 tool stations, eight on either side of the turret, with part transfer from one side to the other.

The first two Double Front 50 machines were delivered in 2015 and the third in 2018. These were purchased solely to produce the straight SharkBite fittings mentioned above. These differ from the 10 Gnutti transfer machines RWC has at its Australian headquarters, which are horizontal turret models that machine fittings from forgings. Conversely, the three Double Front 50 machines are bar-fed, vertical turret models. They have a 50-mm barstock diameter capacity and feature 16 tool stations, eight on either side of the turret, with part transfer from one side to the other.

According to Giorgio Brembilla, sales manager for Gnutti North America, having two independent chucks for each station makes it possible to better split the operations without having limits on backworking. He says the Double Front machine design also enables fast setups for a new job because there are no channels in the barfeeder that must be changed. Instead, the bar centerline is adjusted and a barfeeder collet is changed. In addition, the machine uses either standard ISO or HSK toolholders that can be preset offline. Jaws or collets can be quick-change versions, too. 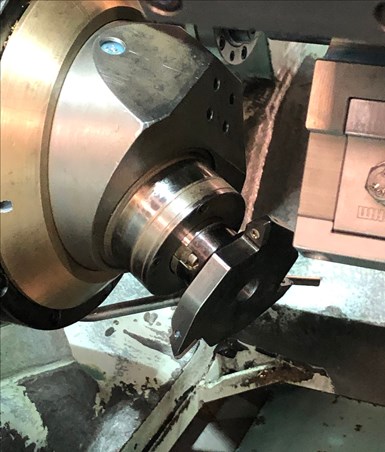 One of the machines features a polygon cutting head used to create hex shapes.

The integrated bar feeder is managed by the machine’s CNC. A new bar can be loaded in six seconds. The CNC-controlled saw cutting unit has been designed to use very thin blades (less than 1.2 mm), minimizing cutoff material. Two of the machines have X- and Y-axis movement to create features such as hex profiles. The other uses a polygon cutting head to create them.

RWC initially used hollow barstock, but sometimes experienced issues with droop. It now uses solid barstock, which the company says it can machine more aggressively. Machining cycle time for both types of stock are the same. Plus, the company reclaims upward of 85% of the material through chip collection. It has noticed a difference in material machinability since the industry has moved to silicon brass, but says the machines’ spindle load monitoring capability has been helpful in determining tool wear or breakage.

An example of a straight SharkBite fitting is shown at the top of this page. These three types of fittings can run through any of the machining and assembly cells: SharkBite connection to ID thread, connection to OD thread and dual connections.

The machines feature 16 tool stations, eight on either side of the turret, with part transfer from one side to the other.

Parts come off a machine complete and are conveyed to a double-barrel washer to remove brass swarf. They are then conveyed to the assembly unit, which was designed and manufactured by Italy’s Felp Assembly Systems. 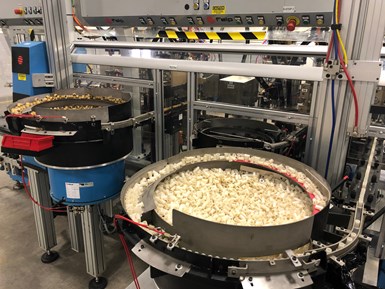 Bowl feeders deliver internal plastic components that are automatically installed in fitting bodies. A crimping operation is then performed to enclose them in the bodies.

Once inside this unit, a robot orients a part that then goes to an engraver to mark product information on it. The next steps include adding grease and other internal elements such as o-ring, tube liner and clamping cartridge. A crimping operation (two for double-connection fittings) enclose those elements in the fitting body. Each assembled part is inspected to ensure the presence of all elements and verify that the cartridge has its signature grab ring and the crimp(s) are flush. If an issue is detected, the part is removed for rework or scrap.

The three machining and assembly cells currently run 24/5 and are tended by six operators. RWC’s Cullman operation has a wealth of other capabilities, including plastic injection molding and extrusion, the latter to produce PEX pipe. Having all these capabilities in-house helps it to better maintain quality and ensure there is no process or product variability that cannot be effectively controlled using outside vendors.