Find the definition, types and advantages of both CNC collets and chucks for workholding as well as the best applications for each, in this article.

Collets are generally used when the diameter of the part or bar to be gripped ranges from 1/16 inch to 2.5 inches. Compared with standard triple-jaw chucks with soft jaws, standard collets tend to be inexpensive and more accurate for gripping in the small-to-medium range. Conversely, three-jaw chucks are usually ineffective and cumbersome when used to grip items this small. 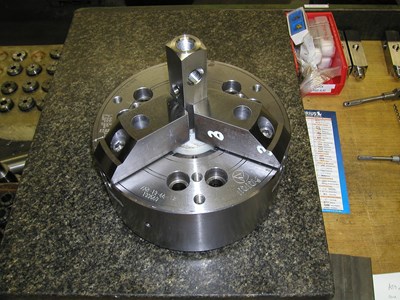 Three-jaw chucks are equipped with either hard or soft (machinable) jaws, which are usually bored or turned after the chuck is attached on the machine so it can accommodate various jobs.

Today, CNC lathes available in the United States are usually equipped with a standard, wedge-style, three-jaw power chuck as the workholding device. This type of chuck is equipped with either hard or soft (machinable) jaws, which are usually bored or turned after the chuck is attached on the machine so it can accommodate various jobs.

Some key advantages to a jaw chuck are positive length and gripping capability that stem from the fact that the mechanical closing function is perpendicular to the centerline. This provides a positive Z-axis location for all parts being machined. It's important to always refer to the manufacturer's manual for appropriate gripping forces needed for the spindle speed your job requires.

Standard draw-in collets, used when specifying a collet-adaptation chuck for a CNC lathe, move in the Z axis according to how much the diameter of the gripped surface varies. A standard rule of thumb is that, for every 0.001 inch of variability in the gripping surface, the part will move 0.003 inch in the Z axis. Standard draw-in collets provide the most positive contact and the best gripping power when the part is gripped directly under the head angle of the collet. In turn, the collet receives mechanical closing forces directly from the inside angle of the spindle or collet chuck.

When a collet-type workholding device is used, the part being gripped and machined will be closer to the headstock bearings on the machine tool or indexing fixture than is the case when using a power chuck. This provides good rigidity, accuracy and roundness. Because standard chucks attach to the spindle nose, they tend to have more overhang, which can produce a cantilever effect that may affect rigidity and accuracy.

With standard chucks, hard jaws must be used or the user should bore several sets of soft jaws to accommodate various sizes.

Some collets incorporate replaceable insert pads that are available for a range of sizes. This reduces the cost of workholding, but it does not guarantee optimum concentricity or accuracy. Ordinary master collets and pads tend to be less accurate because the pads adapt mechanically to the master collet during use. With standard chucks, hard jaws must be used or the user should bore several sets of soft jaws to accommodate various sizes. Soft jaws can also be adapted to accept the locking mechanism for collet pads. This provides a higher degree of flexibility.

Off-the-shelf, hardened and ground collets are more accurate and provide longer lasting concentricity than the hard or soft jaws of a standard jaw chuck. This occurs mainly because the collet grips and locates the part around its complete periphery, thus giving the part being machined a positive location and grip. Collets are also better for gripping parts during secondary operations. A collet's ability to grip entirely around a part's periphery yields a higher degree of rotational concentricity, thus producing a more round part than would be possible using a standard jaw chuck. 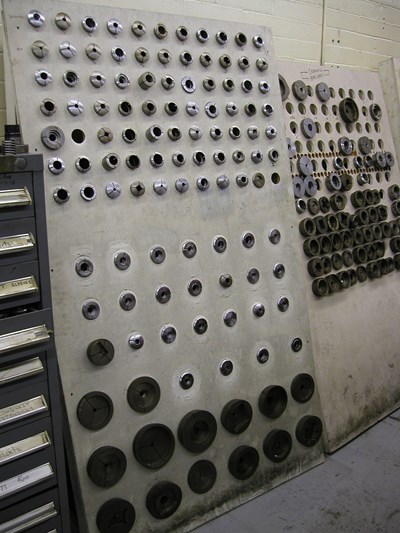 Off-the-shelf, hardened and ground collets are more accurate and provide longer lasting concentricity than the hard or soft jaws of a standard jaw chuck.

Collets are also better for gripping extrusions or special shapes than three equally spaced chuck jaws. For optimal gripping and machining results, the collet designer can select the number of splits or segments that conforms to the specific application. When high concentric accuracy is required, collets tend to be the most popular workholding choice because they can be ordered and manufactured to exacting tolerances (0.0002/0.0001 TIR). Conversely, when soft jaws are bored on the machine, accuracy can be only as precise as the machine tool.

Each workholding device has its place in the turning process. Like so much of metalworking, the application determines the degree of precision needed for the workholder.Read “Proper Workholding Selection” for more on how to decide which workholding process is best for an application.

For more information about collets and chucks, read “The Many Sides of Workholding.”