Learn the factors that contribute to carbon steels and their machinabililty as well as the 1214 steels, 1215 steels and 1018 steels, other grades, and more. 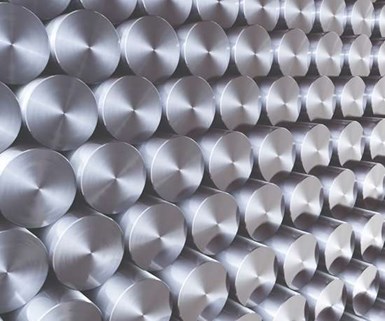 There are many different types of carbon steels, each with different levels of machinability.

Steels are iron-based metals to which other chemical elements have been added. The addition of these elements can create new constituents in the metal, affecting its mechanical properties (hardness, tensile and yield strength, ductility) and machinability. Steels are considered to be carbon steel when no minimum content is specified for chemical elements including aluminum, chromium, cobalt, columbium, molybdenum, nickel, titanium, tungsten or vanadium for alloying effect; when the specified minimum for copper is 0.40 or less; and when the limits for the following elements are not exceeded: manganese—1.65 percent; silicon—0.60 percent; and copper—0.60 percent.

Index Contracts in September After a Promising August
Helpful, Free CAD Model for Those Who Machine DOM Tubing

If the grade designation of a steel begins with a “1,” chances are that it is a carbon steel. The 10XX series steels (where the XX or last two digits represent the average or mean carbon content of the grade) are plain carbon grades. The 11XX steels are resulfurized grades and are free machining steels. The 12XX steels, resulfurized and rephosphorized, are the “best” machining grades. The 15XX series steels contain high manganese of more than 1.00 percent; the 13XX series have even higher manganese content and are the only exception to the “1 as a first digit means carbon steel” rule. The 13XX steels (manganese more than 1.60 percent) are considered alloys.

Grade 1008 (0.08 mean carbon), 1018 (0.18 mean carbon) and 1045 (0.45 mean carbon) are all carbon steels, yet they have significantly different properties. Grade 1008 has high ductility because of its low carbon content and is better for cold heading and forming than for machining. Grade 1018 is a common grade used for many general applications, including welding, and is often selected on the basis of its low cost. Grade 1045 is frequently selected for its higher strength and mechanical properties. While its carbon content makes it difficult to weld without special techniques, 1045 is common in shafting and other power transmission parts. (Read “Material Influences on the Weldability of Carbon Steel.”)

Under a microscope the structure that results from the increasing carbon can be seen. The carbon forms a darker, harder phase called pearlite, which is composed of the ferrite interspersed with layers of iron carbide, a very hard constituent. It is the increase in this pearlite phase, driven by the carbon content, that explains the increase in the steel’s mechanical properties, especially the hardness. Above 0.60 carbon in plain carbon steels, a thermal treatment called an anneal is used to modify the microstructure and reduce the steel’s hardness.

Carbon has a leading role in the machinability of plain carbon steels, primarily by its effect on the bulk mechanical properties like hardness, tensile and yield strength and ductility.

Plain carbon steels “peak” at 0.18 to 0.22 percent carbon before the machinability starts to decrease because of the higher hardiness resulting from higher carbon contents. A steel of optimum machinability—one both soft enough to easily form a chip, yet brittle enough to allow that chip to break and separate—results in longer tool life and a superior surface finish. The 11XX steels, called resulfurized steels, employ additions of sulfur and manganese to try to create this soft, yet brittle workpiece material.

These manganese sulfide inclusions are visible under the microscope, generally elongated, and distributed throughout the steel. An additional benefit provided by these sulfides is their role in the retention of built up edge on the tool, which is influenced by the anti-weld properties of manganese sulfide.

The Effect of Cold Work

In the hot-rolled, as-rolled condition, the plain carbon steels typically have the mechanical properties shown in the HR entry for the three grades shown in Figure 1. Most bars for machining are cold drawn, which increases tensile and yield strength and hardness and reduces ductility as measured by percent elongation and percent area reduction. The cold-drawn properties are shown in the line labeled CD for each of the three grades. The percent change line shows the percent effect of the cold work on the steel’s mechanical properties.

Cold drawing is a multi-step process where the bars are first cleaned by abrasive shot blasting to remove the hard abrasive oxide scale, then cold reduced by pulling through a carbide die smaller than the bars’ starting diameter, resulting in a uniform amount of cold work being imparted to the bars. (It is called “cold drawing” because no heat is deliberately added in the process.) After drawing, the bars are straightened and cut to length by a saw or shear before packaging for shipment.

We have seen that the plain carbon steels reached an optimum machinability (about 35 percent of 1212 tool travel per minute production rating) and hardness in the range of 125 to 140 BHN. We have seen how the addition of sulfur (and manganese) can improve the machinability of steel. Figure 1 shows how cold work by cold drawing can improve the mechanical properties of the steel and by increasing strength, eliminates gumminess. In the 12XX series steels, all of these approaches combine to make a product that is optimized for machining:

To get the maximum production from automatic machines, additions of lead, bismuth, selenium and tellurium have been commonly used. Consolidation in the global steel industry has made lead and bismuth the most widely available choices today. However, another “unleaded” steel, called 12T14, is available from Laurel Steel (Ontario, Canada). This steel uses tin as an addition to promote machinability.

The addition of lead to steel while it is still liquid results in the lead being deposited as pure metallic lead particle on the heads and tails of the manganese sulfides dispersed throughout the steel. Pure lead is both softer than steel and has a coefficient of friction comparable to that of graphite lube. Because of its role as an internal lubricant, lead allows the steel to be machined at higher speeds than its non-leaded counterpart.

It is widely established that lead promotes machinability, but the relative contribution of lead compared to sulfur is little known. For example, grade 1117 is virtually identical to 1018 except for the manganese and sulfur. Yet the increase in production rate (as measured by inches of tool travel per minute) is 33 percent, attributable to the increased sulfur. Adding lead to 1018 to make 10L18 increases the production rate by 27 percent, while adding lead to 1117 results in a production rating of 65 percent greater than 1018. These differences in production rate show that there are two different mechanisms involved. The addition of sulfur controls the built up edge on the tool, so that the maximum temperature during the cut is in the built up edge rather than the tool, promoting longer tool life and both higher speeds and feeds. In addition, a close examination of the chips will show that they get thinner in resulfurized steels, demonstrating that the strain hardening by the tool is decreased. Strain hardening accounts for as much as 75 percent of the heat involved in cutting, according to some experts.

Lead, on the other hand, acts as an internal lubricant, reducing friction, resulting in a much less significant improvement in machining production. As other technological means have been developed to remove the heat during machining (high-pressure and high-velocity coolants, for example) the importance of lead is not as critical as it once was.

In the 12T14 steel, the tin additive is thought to promote machinability by its segregation in the grain boundaries of the steel. This allows the grains to be separated with lower forces and less energy than similar but non-tin treated steels during machining. While speeds and feeds for 12T14 are not consistently equal to those of 12L14, many thousands of tons have been sold for applications specifying no lead and production rates higher than those routinely achieved with 1215.

Many North American machine shops are starting to get requests from their customers to certify their parts machined from steel to meet the requirements of the European Union’s End of Life Vehicles (ELV), Restriction of Hazardous Substances (RoHS) and the Waste Electrical and Electronic Equipment (WEEE) directives. Each of these directives purports to ban lead, but each actually permits lead as an “alloying element” in steels up to 0.35 percent, according to the exemption statements and annexes. As long as the material certification shows 0.15 to 0.35 percent for lead, the steel parts are compliant with these directives.

The machinability of carbon steels is determined by a number of factors. Microstructure, cold work and content of carbon, sulfur, manganese, phosphorus, nitrogen and lead all play a role in improving machining productivity. As a general rule, higher sulfur contents promote higher feeds by reducing strain hardening of the chip and maintaining a consistent built up edge on the tool. The addition of lead permits higher speeds as its lubricating action reduces the friction and, thus, heat. Both mechanisms prolong tool life. For applications requiring no lead, 1215 or a proprietary tin-added 12XX series grade (12T14) may be appropriate. When the machinist wonders why there seems to be so much variation between different lots or grades of steel, the variation that could occur in any of the above discussed factors ought to give them a starting point for understanding.

Sulfur and Lead Effect on Machinability