IT is the Key to Effective Machine Monitoring

This aerospace manufacturer’s IT team was essential to successfully setting up a machine monitoring program.
#Industry40 #aerospace 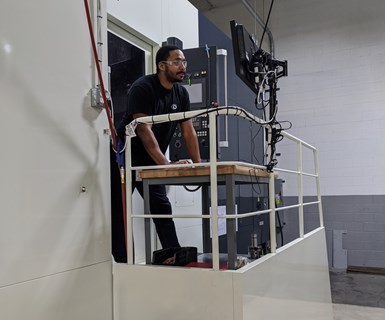 Dynomax’s IIoT platform from Forcam includes terminals at each connected machine, where operators can input data about a job, access information and even complete online training.

As manufacturers begin implementing more digital manufacturing solutions, the role of IT is becoming more important. Software programs such as ERP and machine monitoring affect all aspects of a manufacturer, from the front office to the shop floor to the IT department. Ryan Lanham has seen the expansion of IT’s duties in manufacturing firsthand—he has worked in the IT department at Dynomax, a manufacturer in Wheeling, Illinois, for more than 10 years. When the company recently implemented an Industrial Internet of Things (IIoT) cloud platform solution with MES functionality and machine monitoring from Forcam, his IT team was instrumental in ensuring the system’s success.

Mr. Lanham notes that there are similarities between machine monitoring and IT that helped him in the implementation process. “Everything that IT is responsible for in our environment has either a green light or a red light. We know real quick, sometimes before the user even knows, of a problem,” he says. “So, we wanted to bring that to the machine level. And that’s kind of why it ended up in our wheelhouse.”

Dynomax began by surveying several machine monitoring systems to find the best fit. When evaluating its options, the company looked at ability to integrate with the its existing Epicor ERP system, cost and flexibility. “We’re continuing to learn from our mistakes, continuing to learn from what we’ve done, and then we’re doing it better again. So, we knew that whatever product we chose, it was going to have to be something that was flexible,” Mr. Lanham says.

Once Dynomax made the decision to go with Forcam, Mr. Lanham says the implementation was relatively quick. “We went from zero to five machines and the ERP integration in about three months, so it was fairly rapid,” he says. Since the initial five-machine pilot, the company has added Forcam to seven more machines.

The 12 machines chosen out of the company’s roughly 300 machines for the Forcam integration are all dedicated to producing aerospace parts. Aerospace is only one end market the company serves (it also produces parts for the medical, energy and transportation industries, among others), but it accounts for about 40% of its business. Parts include large support structures such as fuselage and floor panels, small- and medium-sized components such as wing ribs and struts, landing gear components and assemblies. Much of this work involves in-house engineering, rapid prototyping and high-mix, low-volume production.

How the System Works

The Forcam system includes terminals at each of the connected machines, where operators can input information about the job. Operators can also use the terminals to access information about jobs. Dynomax has integrated its Solidworks product data management system, enabling operators to pull up 3D solid models of parts on the terminals while machining, along with operational-level prints. This is especially useful when machining aerospace parts, which can have as many as 100 operations. The company uses Vericut to simulate machining programs, and operators can access this information via the terminal too. “That way he’s not playing around with speeds and feeds,” Mr. Lanham says. Operators can also use the terminals to complete training through an online platform called Moodle during their downtime.

Five monitors throughout the facility display data from the connected 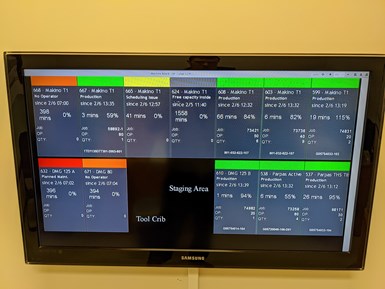 Dynomax has five screens throughout its facility that show machine data. This enables the team to see the machines’ statuses and quickly resolve any issues.

machines. “Whenever a machine is in a state for more than 15 minutes, we start sending emails,” Mr. Lanham explains. “So, if it’s a scheduling issue, we start sending off scheduling alerts to the scheduling team. If it’s a material issue, we send off alerts to the material team.” The team has also been able to extend these email alerts into its ERP system. This enables them to, for example, alert the material handler if a certain material for a specific job is missing.

As is common with software programs, when Dynomax purchased Forcam, it wanted to make some modifications. Oftentimes, this requires a company to pay extra, which can add up to a significant portion of the investment. However, Dynomax’s IT team wanted to make many of the changes to Forcam itself. The team got a proof of concept (POV) of the program and realized that the stack was similar to a modern web development stack, which they were all familiar with. “We knew that we could extend it and make it even better,” Mr. Lanham says. “Because the more we tie all of this stuff together and make it easy for the end user, the more they’ll actually use it.”

These capabilities enabled Dynomax to make most of the modifications in house. He adds that Forcam is open and responsive about the changes his team can’t make. For example, when Dynomax suggested that the program needed a new API, Forcam rolled one out a year later. And when Dynomax noted that the Java-based terminals on the shop floor were running slowly, Forcam rebuilt them using HTML. “It’s much faster,” Mr. Lanham notes.

The biggest challenge, according to Mr. Lanham, was engaging the machine operators who would be most affected by Forcam on a day-to-day basis. He says these employees were initially hesitant about monitoring software. With this in mind, Mr. Lanham and his team took on the role of engaging the machine operators during implementation. “What made that successful for us was we embedded IT people directly into the shop floor,” he explains. Each morning, one of his two IT support technicians would go with the shopfloor supervisor to each of the 12 machines and ask the operators how the system was working, if there were any issues, and if they had any feedback for the IT team. “Those notes would come back to me, and that’s how we would then correct any issues, behaviors or problems,” he says.

Mr. Lanham also started holding recap meetings on Friday afternoons. These meetings were brief, and included a representative from the scheduling, programming, engineering and materials handling departments. They would pull reports from Forcam to see the week’s productivity and where time was being wasted. “Because I had those people in the room at the same time, we could assess the why and get some corrective action from it,” he says.

Ultimately, Mr. Lanham wanted the machine operators to see Forcam as a tool to help them. “At the end of the day, this isn’t about monitoring the user; this is about helping the operator when he has a problem,” he explains. “If you have a tooling problem, if you don’t have material, if you have something that is stopping you from running this machine, put it into that alert.” 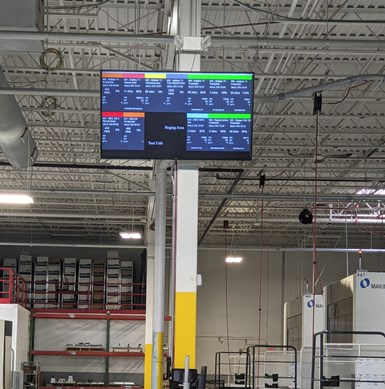 The Forcam system increased Dynomax’s productivity by 20% within three months. The shop can also now track undefined stoppage time, which it discusses at weekly meetings.

The nature of the work involved makes it difficult to calculate how much Forcam has improved productivity at Dynomax. The aerospace work isn’t full capacity, and oftentimes the machines aren’t running due to engineering, source inspection or some other factor. “In the beginning, however, we noted about 20% of productivity improvement within three months,” Mr. Lanham says.

“Where Forcam has really provided some value back on our shopfloor is its ability to let us know if a machine is stuck in a state that needs additional support from the rest of our business,” Mr. Lanham explains. When a machine is having a problem, “Forcam and the alerting has really helped us engage the rest of our business units to then come fix the problem on that machine to get it back into production.”

Forcam also enabled Dynomax to track undefined stoppage time, which is time that the machine could have been running but wasn’t. The team reviews undefined stoppage reports and discusses them at their weekly meetings. “We would encourage our operators to re-code that time and tell us what happened,” Mr. Lanham says. “Because if you don’t tell us, we can’t help you.”

Implementing machine monitoring has also helped the IT team work more closely with the shop floor. Mr. Lanham says as he interacts with other shops, he has come to realize that it’s common for IT teams to be separated from the shop floor. He says that over his time at Dynomax, he has developed an understanding of the manufacturing industry and a rapport with the people on the shop floor. “I think that’s important, that your IT team knows your shopfloor personnel,” he says. If different teams can break out of their bubbles and learn from one another, the whole company will benefit.

Going forward, Dynomax has plans to add Forcam to the new machines it deploys, including a new gantry-type machine from DMG MORI, which the company expects to have online in the next few months. It also plans to continue integrating Forcam deeper into its technology stack. For example, it’s pushing down the final phase of DNC, which will enable programmers to send programs directly to the machine through Forcam. This measure will increase security, as all of the communication happens from Forcam to the machine. It will also improve efficiency, because operators won’t have to wait on programmers.

Here’s another article on this topic:
How to Collect and Use Machine Data
Manufacturers now have the ability to collect a range of data points, but it can be easy to feel overwhelmed by all of the ways to collect and use machine data. Here are some tips on how manufacturers can gather data and use it to make decisions.