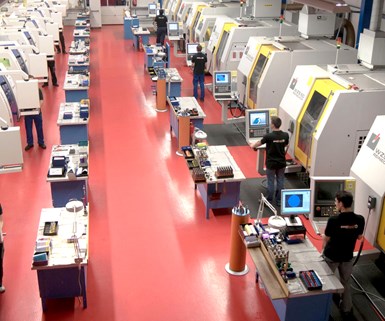 Inovatools is celebrating its 30th anniversary. The Germany-based tool manufacturer counts its fleet of machines, its technology center for developing and testing special tools, its coating department, its 250 skilled personnel, and its range of services as the forces behind the company’s success.

“Back in 1990, the company’s founders could not have dreamed that the small resharpening service they were running from Beilngries in Bavaria would today count among Germany’s top 25 tool manufacturers in the sales ranking of the German precision tool industry,” says Inovatools. The company currently manufactures at four sites, making tools for the automotive, aviation and aerospace, and mechanical engineering industries.

Inovatools considers its high degree of vertical integration an important basis for its success, from design to grinding, edge preparation and micro-geometry to coating. “Controlling the entire workflow means that we can ensure the highest possible quality standards,” says Ditmar Ertel, managing director. “Our dedicated technology center for the manufacture of special tools in Mieming, Austria, allows us to respond instantly to individual customer requirements and expedite in-house developments.”

By 2017, Inovatools had invested around 15 million euros into global expansion. The company’s acquisition by Swedish investor Indutrade AB in 2018 is said to have opened up more opportunities such as continual investment in safeguarding and developing the company location.

Export plays a leading role for Inovatools. Around 50% of Inovatools’ products are shipped abroad. To this end, according to Mr. Ertel, the company has prioritized its online presence.