The Cincinnati-based manufacturer introduced the Minimatic line of miniature pneumatic components in the early 1950s. Because such parts had not been previously available from anyone else, they soon became Clippard’s primary product line. 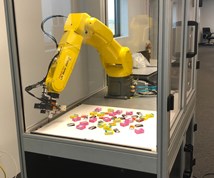 Today, the company’s offering is comprised of more than 5,000 standard products, including valves, cylinders, fittings, modular components, push-buttons, stainless steel cylinders, electronic manifold cards, circuit analyzers and pre-piped manifold subplates. It is the industry’s most
complete line of high-quality, miniature pneumatic components, most of which are manufactured in the United States.

Clippard Instrument Laboratory has led its industry with many “firsts,” including the establishment of the 10-32 thread as a port, fluidic interface valves, plug-in air logic modules and micro-based, computer-control, air logic control systems.

The company also prides itself on the training classes it offers. “Last month, we held our 89th class,” says Robin Rutschilling, Clippard’s manufacturing operations manager. “It’s a 3-day training session, and there are usually about 20 students in each class. Distributors from around the world come here to learn how our products work and how to market those products.”

Clippard is currently guided by the founder’s sons, President William L. Clippard III and Vice President Robert L. Clippard, with the third generation of the family also onboard.

The company serves a range of customers, including those in the medical, textile and automotive markets. Of its 200 employees, 140 are involved in manufacturing. Clippard also has a European office in Brussels, Belgium.

“In the pneumatics industry, 80 percent of the market consists of the larger products,” Mr. Rutschilling explains. “The other 20 percent is miniatures, which is our niche.”

He adds that the majority of Clippard’s products are brass components, with some being made of stainless steel and aluminum.

Mr. Rutschilling currently serves on the PMPA Technical Program Committee and assists with the National Technical Conference. He previously served as secretary, vice-chairman and chairman of the PMPA’s Southern Ohio/Indiana District.

“PMPA has been a great opportunity for Clippard and for me,” Mr. Rutschilling says. “It has helped me grow my leadership skills, as well as my confidence in speaking in front of other people and representing the company.”

Representatives from Clippard attended their first PMPA National Technical Conference in 2006, and the company immediately joined as an associate member. “It has been a great marriage,” Mr. Rutschilling continues. “We now send our people to the Tech Conference every year.
“I like the PMPA chapter meetings too,” he adds. “We send a lot more people to the chapter meetings than we can send to the National Technical Conference. Our employees have become very comfortable dealing with other PMPA members.”

“Our people tell us they get a lot of ideas from the Listserves,” he continues. “The other day, there was a question from a company about starting a weekend shift. Within an hour, there were people responding with lists of dos and don’ts. That’s incredibly valuable to the members.

“What we get the most out of PMPA are the technical ideas and the take-homes from the conferences,” Mr. Rutschilling says. “Every year, we pretty much pay our annual membership dues with the ideas that we bring back from the National Technical Conference.”