Thread Whirling On The Subspindle

The screw machine industry, not surprisingly, started out making screws. Then, screw machines were used to make almost everything but screws—electrical components, aerospace fasteners, plumbing connections and thousands of other kinds of parts.
#medical

On this thread-whirling cutter, six inserts are used to cut bone screw threads.

With the bone screw in the subspindle, the thread-whirling attachment is positioned to cut the thread. The whirling tool is offset from the center line.

A hip or "lag" screw lends itself well to thread whirling in the subspindle because of its relatively straight shank.

This thread-whirling attachment is angled to produce the desired thread pitch.

The screw machine industry, not surprisingly, started out making screws. Then, screw machines were used to make almost everything but screws—electrical components, aerospace fasteners, plumbing connections and thousands of other kinds of parts. Many shops searched high and low for jobs that could give entrance to other industry segments.

Therefore, it is ironic that (thanks to technical advances) machine tools' ability to cut exotic materials coupled with the demand for orthopedic repair parts are once again manufacturing screws. However, this time they are for the human body. Our physically active and aging population is generating a demand for orthopedic repair parts that's unprecedented and guaranteed to grow (see "Medical Industry Statistics" below). 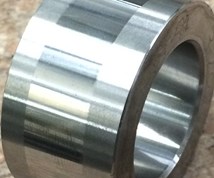 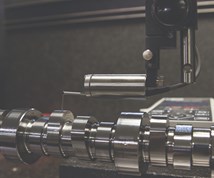 Barely a day goes by that Production Machining doesn't receive a submission for something to do with machining parts for the medical industry, and most often, bone screws. The job facing medical parts manufacturers is how to select the most efficient metalworking techniques from numerous methods.

Thread whirling is one such technique that has become popular for efficiently cutting quality threads on bone screws. Common materials used are 316, 316l, 303 stainless and titanium—none of which is easy to cut because of the bone screws' sharp angles, thread lengths and large differences between the root and head diameters.

An external thread-whirling tool is basically a ring with inserts mounted on the ID. A machine-mounted attachment carries the tool and rotates it at a high speed relative to the slower rotating workpiece. The ring is positioned slightly off center from the part so that a single cutter engages the work per rotation. This creates a nibbling action that produces burr-free threads. The thread pitch is set by the angle of the cutter ring to the workpiece.

CNC Swiss-type machines are well applied to this technique because the moving headstock feed can be programmed to synchronize with the thread-whirling attachment. On most bone screws, the process involves first whirling the thread on the main spindle, then handing the part off to the subspindle to perform backworking operations to cut the screw head and driver connection.

For use on its Deco line of Swiss-type machines, Tornos Technologies (Brookfield, Connecticut) has developed a thread-whirling attachment that provides added flexibility of machining threads on the subspindle. This attachment was specifically developed for cutting larger-size threads typically found on hip or "lag" orthopedic bone crews. As shown in the photograph on the left, these screws have a relatively straight shank that is easily gripped in the subspindle collet.

However, there are generally several operations performed on the shank of these cannulated (tubular) parts including drilling, turning, gundrilling, broaching, deburring, tapping and cut-off on the main spindle. On the opposite end of the part, additional operations can include drilling, thread whirling, thread deburring and milling in the counter spindle. Complex as these screws are, all of the necessary operations can be completed in a single machine using both spindles while eliminating secondary operations.

Applying CNC Swiss-type machines to medical parts manufacturing brings the flexibility of these multi-axis machines to bear on a market segment that demands 100 percent quality, large varieties of shapes and sizes and lot sizes that are relatively small. The idea behind developing the ability to thread on the subspindle, if needed, is to add production flexibility to help shops balance the front and backworking operations for these complex parts so throughput can be optimized.

The following information has been compiled world wide.

The following information is regarding the
orthopedic industry.