Appears in Print as: 'Shop Automates its Second Ops'

Two seven-axis robots enable two second-op mills to run lights out eight hours in the evenings to win 64 hours of unattended machining time per week for this Ventura, California, shop.

The ideal production scenario for a shop is for one piece of equipment to machine parts complete. Ventura, California’s Swiss Productions Inc. has machining technology capable of doing that. For some jobs, however, parts that are first machined on a CNC turning center require secondary machining work on a milling machine, and with that comes the need for an operator to tend those second-op machines. Typically.

However, Swiss Productions has recently added two collaborative robots (cobots) to tend a couple of its compact, second-op CNC mills. The new automation enables the machines to run unattended for long stretches of time during the day and even lights out for eight hours in the evening, thereby winning the company 64 hours of nighttime, unattended machining each four-day work week.

Plus, cobots offer advantages in that they can work safely alongside humans without the fencing commonly required for industrial robots, are intuitive to program and often can be easily redeployed to other equipment, as needed.

That said, the robots Swiss Productions Inc. has integrated offer all those benefits plus one. That is, a seventh axis, which, compared with conventional six-axis robots, provides additional flexibility more like human arm movement for reaching around obstructions such as machine tool doors and operating in confined spaces. In fact, the shop’s two robots even close machine doors and hit cycle start on their own, enabling the people who previously tended the machines to perform more valuable duties than simply loading and unloading machines.

With the OB7’s safety sensors, the robot can work at high speeds when no people are in immediate proximity and then slow to human-safe speeds or stop when people are nearby. (Photo credits: Swiss Productions Inc.)

Automation with an Arm

Starting out with only 12 screw machines in 1982, Swiss Productions’ growth is impressive, as it now houses more than 50 screw machines, 30 secondary operation machines and 10 video inspection stations. The precision machine shop’s capabilities include machining parts with diameters as small as 0.019 inch to as large as 2.5 inches in diameter. As a high-volume operation, it produces more than 2 million parts per month for the medical, electronics, aerospace, automotive and irrigation industries as well as the government. 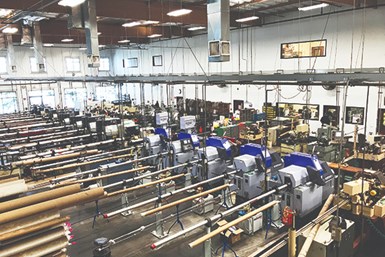 With more than 50 screw machines, 30 secondary operation machines and 10 video inspection stations, the precision machine shop’s capabilities include machining parts with diameters as small as 0.019 inch to as large as 2.5 inches in diameter.

“We settled on Productive Robotics because they were local, and they offered a user-friendly robot with quick setup,” Lunceford says. “We tested four robots and kept coming back to the OB7.”

Lunceford’s appreciation of this robot is rooted in its design and ease of use. To initially set up the robot, it easily rolls to a machine and locks into place with built-in casters and leveling feet. Then, instead of programming with code, an operator “teaches” the robot its required movement, which takes 15 to 40 minutes, depending on part complexity. The operator grabs the robot’s handle (at the end of the arm). The robot is floating and loose at that point, and is therefore able to be easily moved. If the operator would like the robot to pick up parts off a plate, for instance, he/she will pull it over to the part and then push a button on the handle that closes the gripper on the part. This way, the robot knows the intention is to pick up that part. Next, the operator moves the robot, part in hand, where he/she wants it to go. Once it is in the position where it should be, the operator pushes another button that opens the gripper to let go of the part.

Compared with traditional six-axis robots, the OB7’s seventh axis provides additional flexibility for reaching around obstructions and operating in confined workplaces. According to Bogart, the seventh axis is what makes the robot move like a human arm, designating it as unique for the robot market.

The robot has been taught by Swiss Productions’ operators to reach into the Mini Mills on which they are working, grab completed parts and move sideways with them. Then, they blow out the collets that are being used to hold the parts. Their quick-turn radii enable them to close the machine door, check that the door is shut tightly and then pivot to hit the cycle-start button that is 180 degrees from the previous location.

Zac Bogart, president of Productive Robotics, says his company wanted to target operators who don’t know anything about robot programming. “We looked at the development of the OB7 as, ‘if a person can tell another person how to do the job, shouldn’t a person be able to tell a robot how to do the job in as close to the same way as possible?’” Bogart says.

Productive Robotics also attempts to make its robot work like a human brain as much as possible. “When we build our robots, they go through a process where each of the seven joints in the robot learns about itself,” Bogart says. He explains that the robot learns about its internal specifics, including gears, bearings and motors, so it can move precisely and smoothly. This process takes about 15 to 20 minutes for each joint.

Since Productive Robotics and Swiss Productions have been working together, their relationship has become close. Lunceford says he allows Productive Robotics to use his shop as a launching pad, accepting interviews with other companies that are looking to invest in an OB7. The companies visit Swiss Productions to see for themselves how the robot has integrated into the shop’s capabilities.

“The business/working relationship with Productive Robotics combined with its on-time service has been top notch,” Lunceford explains. “Everything that we have asked, needed or suggested, the company has implemented.”

Freeing Up Humans for Critical Tasks

Although humans are mostly removed from an operation when robots come into it, those humans are freed up to do tasks where their intelligence, which robots do not possess, is needed.

“People tend to look at robots as replacing humans,” Lunceford says. “But they are not. They are eliminating tedious, manual tasks from day-to-day that can instead be performed by a robot and then that person can do things that the robot cannot do. The robot cannot think or design. They can only do in-and-out motions and push a button.”

Lunceford and his team at Swiss Productions have experienced this for 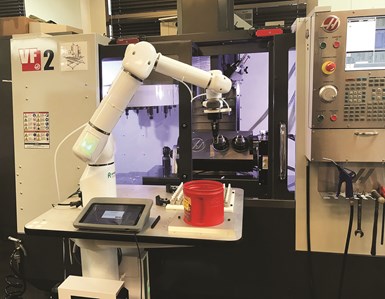 Swiss Productions Inc. owns two OB7s that run on its Haas VF2 Mini Mills. One Mini Mill runs a 6,000-piece order while the other runs a 2,400-piece order. The shop usually machines its own grippers for the robots. Production Machining learned about the OB7 from an Absolute Machine Tools’ open house. The company distributes and services the robot and is currently one of the only authorized OB7 integrators for CNC machining centers.

themselves after implementing its OB7 robots. The automation aided in increasing machine capacity at the shop without having to hire anyone or let anyone go. When it purchased its first robot, the company only had four machines in its tooling department. Now it has 10 and two of them are running with the robots.

These operators now run lathes while also maintaining the OB7s’ stations and inspecting parts. One operator is assigned to each of the two robots and is responsible for removing the completed parts from the robot’s table every couple of hours and inspecting them while the robot continues to perform its loading task. With these robots, operators can do three tasks in the place of one, making them much more efficient.

Swiss Productions put its investment in automation to good use by integrating lights-out machining for its second-ops machines, which has increased the shop’s lead time significantly. A typical batch size for the shop’s Mini Mills that the robots tend consists of a 6,000-piece order on one of the machines and a 2,400-piece order on the other machine. “If I had a person running the 2,400-part order, it would probably take us eight weeks to complete that job,” Lunceford explains. “We have cut that time in half because we can now run that machine lights out with the robot.”

Not having to program robots is another time saver. Because the OB7s only take 15 to 20 minutes to set up for a simple part, every setup saves that much time, according to Lunceford. “So, let’s say you do 30 to 40 setups a year, that is an incredible amount of time you are saving,” he says.

He also comments on the simple plug-and-play system the robot offers and says not having to punch in numbers in the machines’ CNCs is an additional time saver.

Because Swiss Productions has experienced great success by implementing its two OB7 robots, it plans to purchase more after it relocates to a larger facility in Liberty Lake, Washington, in the fall of 2022.

Lunceford explains that the company’s 37 employees are not all relocating with the company. In fact, only 14 are planning to move with it. Although he says the company will likely hire 10 people, the shop will need to be innovative and integrate more robots. He says the Haas Mini Mills will be facing each other at the new location, so he plans to buy robots that can operate two machines simultaneously.

In the meantime, Productive Robotics will continue to advance its technology to develop robots that are easier and faster for users to implement by making them smarter. Bogart says the industry is demanding smarter technology in general – not only for robots.

He also hints about a trend that embraces the idea of a third party creating accessories for specific jobs, such as welding or inspection, on a generic robot.

With a focus on designing its robots for the best fit for the most jobs, Productive Robotics created the OB7 with a seventh axis or seventh joint. This seventh axis is the characteristic that enables the robot to reach around obstructions, as a human arm can. Without the seventh axis, this motion is impossible, according to Zac Bogart, president of Productive Robotics.

“The seventh axis is the motion you use if you are arm wrestling — using the motion of your upper arm,” Bogart explains. “That’s the movement that gives machine shops the flexibility to put the robot somewhere other than smack dab in the middle of the work area, so it’s much more user friendly.”

Although Productive Robotics’ OB7 is relatively new to the market, the technology has been evolving since the 1980s when Bogart developed robots in the motion picture special effects business. This job enabled him to design robotically controlled camera systems that camera operators could program on their own. This meant, to him, that he needed to create a system that required no programming, which he did.

“Back in those days, you would fly it around with joysticks like a model airplane,” he explains. “Then, the computer would learn all of these movements and then be able to recreate the movements on film.”

About eight years ago, Bogart started a new company that focused solely on robots; thus, Productive Robotics was born, and then along came what is now called the OB7 in 2017. This time, though, Bogart recognized that computers have become more sophisticated, allowing for less challenging and more rewarding robot creation.

Bogart’s understanding of robot technology comes from the similar technology he learned at the other company he owns that makes high-end digital printing systems. According to him, although they do not appear similar, digital printers are designed to control many elements with a computer, as do robots.

“The technology has evolved all the way through, and that’s the common thread,” he explains.