This rotary transfer machine enabled this shop to increase efficiency and cut the part price by 20 percent.

The rotary transfer machine's turret and machining stations can be seen in this close-up.

This automated parts feeder, provided as part of a turnkey package by TPS International, enables the rotary transfer machine to run unattended for long periods.

There is a great feeling of security that comes from having a shop full of CNC machines busy making parts. But if your shop is not making those parts the most efficient way, it is probably just a matter of time before you lose the work to another shop with a more competitive process. You can (1) enjoy the business you have as long as you have it and not worry about tomorrow, or (2) take the steps needed to make sure that you are the most efficient provider. 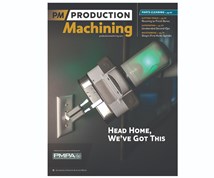 Traditional markets for screw machine parts in the Elgin area declined, and the shop's labor-intensiveness made it difficult to compete against lower-overhead shops with more modern equipment. About 5 years ago, Starro Precision began replacing many of its cam-driven screw machines with CNC screw machines. The primary goal was to produce parts that were completely machined as they came off the screw machines and that required no secondary machining. By reducing or eliminating secondary operations, the shop not only reduced part costs, but it also improved quality by reducing part operations and handlings.

Over the last 3 years, Starro has invested in more than 30 new CNC machine tools. All the while, it has tried to distinguish itself from competitors by becoming a source for engineered solutions for its customers. "Our goal is to have partnering relationships with our customers," explains Lee Dwyer, vice president of sales and manufacturing for Starro. "We are not interested in just renting time on our machines to companies. We want to be a solution provider, using technology to give our customers better parts at more economical prices to make them more competitive." Many manufacturing firms have been looking for that same kind of relationship with their suppliers, and as a result, Starro has built an impressive client list of companies in the telecommunications, fiber optics, electronics, medical and other fast-growth, high-tech markets.

One such customer came to Starro with an order for a brass fiber optic connector in modest quantities. In keeping with standard policy, the job was set up to run on one of the shop's many Star CNC Swiss screw machines. "Any job below a certain amount of running time must be dropped off complete on one of our CNC machines," Mr. Dwyer explains. Most of Starro's jobs go across its Star machines, purchased from Star CNC Machine Tool Corp. (Elk Grove Village, Illinois), which Mr. Dwyer says are largely responsible for the success of the company.

The customer's need for fiber optic connectors increased, and Starro set up a second, then a third, then a fourth . . . eventually the shop was running the job on no fewer than six CNC Swiss screw machines on two shifts. The customer was satisfied because it was getting the increased quantities it needed at the agreed-on unit price. However, Starro realized that its customer's part volume requirements had grown to the point where the shop needed to re-evaluate the production process.

"We were creating more and more work cells for the customer's part, and it was taking up more and more of our machines," Mr. Dwyer elaborates. "We had five or six machines running the job, with five or six operators, five or six setups, five or six work instructions . . . five or six of everything, but we weren't achieving an economy of scale. We wanted to keep the work, but we needed to do it more efficiently and with better consistency and quality.

"We analyzed the part in light of our customer's growing volume requirements," Mr. Dwyer continues. "We determined that we could reduce cycle time considerably if, instead of producing the part complete in one setup on several CNC Swiss screw machines, we produced precision blanks on the Swiss machines and performed the necessary secondary operations on the parts on a rotary transfer machine that we would purchase for the purpose. Reducing the cycle time would enable us to reduce the cost of the part to the customer, perhaps enable us to lock in the job—and make us more competitive for similar high-volume parts and families of parts.

"We approached our customer, explained our ideas for changing how we made his part, and asked for a long-term commitment in exchange for a significant cost savings," Mr. Dwyer continues. "Our customer agreed. We next turned our attention to finding the most appropriate machine."

Starro analyzed the number of stations that would be required for the fiber optic connector and similar parts. The major selection criteria for the machine were capability, flexibility and price. After a review of the machines on the market, the shop selected the Model C128 rotary transfer machine made in France by Wirth et Gruffat and distributed in the United States by TPS International, Inc. (Sussex, Wisconsin).

This machine consists of an octagonal turret that rotates in a horizontal plane and on which part-holding collets are mounted at 45-degree intervals. The turret indexes to present the workpieces held in the collets to machining stations spaced at 45-degree intervals about a circle. Machining operations are typically holemaking operations (drilling, tapping, counterboring, and so on) but can also include milling, turning, cutoff, broaching, crimping and other secondary machining and assembly operations.

As the turret indexes, it presents each workpiece to each machining station in turn. All of the machining stations work simultaneously. Each time the turret indexes, a finished part drops off the load-unload station. Cycle time for machining the entire part is the cycle time for the longest single operation (which can be often be reduced by dividing an operation between two stations). Turret indexing time is a fast 0.8 seconds, and indexing accuracy is ±0.005 mm. Mr. Dwyer would not divulge the cycle time for the fiber optic connector, however cycle times for typical parts produced on the C128 range from 4 to 20 seconds.

The main control of the machine is a top-mounted programmable logic control (PLC). Mr. Dwyer notes that the control is straightforward enough so that the setup person performs the programming. Also, the control facilitates making changes in the machining operations quickly and easily, providing a flexibility that helps minimize setup times.

Starro purchased the machine from TPS International as a turnkey package that includes an automated parts feeding system. Fiber optic connector blanks, made on one of the shop's Star SH-16 CNC Swiss screw machines, as shown below, are brought over in totes and poured into a hopper at the head of the automated part-feeding system. The parts proceed to a vibratory bowl that properly orients and queues them for automatic delivery to the rotary transfer machine's load/unload station, as seen at left. TPS International supplied the turnkey package in about 2 months. "We were up and running a few days after the machine was delivered, and it was operating at capacity in just a few weeks," Mr. Dwyer reports.

To minimize dimensional variations due to tool wear, carbide tooling is used where possible. Monitors at each station check tool status: if a broken tool is detected, the machine stops and signals the problem to nearby operators.

Produces As Much As Six CNCs

Operating costs decreased as well, since the rotary transfer machine obviates the electricity, coolant, tooling, setup and related expenses associated with running the CNC Swiss screw machines. And because the parts are now being processed on one machine instead of five or six, part consistency has greatly improved, making it easier for Starro to meet the cpk requirements for the part.

"Some people have argued that running the job on several CNC machines is still the best way, but the numbers don't add up," Mr. Dwyer insists. "Instead of running the job on five or six machines, each costing from $150,000 to $175,000, we're doing the job for a total investment of about $400,000. In making the change, we were able to give our customer not only a better, more consistent part, but also a less expensive part. We were able to reduce the cost of the part to our customer by 20 percent, giving five parts for the cost of four. We feel that's important, because it shows that we're genuinely concerned about providing our customers with engineered solutions tailored to their specific requirements, providing the best product at the best price.

"Some have questioned the wisdom of sharing the cost savings with our customers," Mr. Dwyer notes. "But last year, a period during which our competitors were slowing down, we increased our production of the connector family of parts by one million pieces. And the fact that we came to our customer with a way for them to cut their part costs will be remembered when they evaluate quotes for future work."

The Wirth et Gruffat C128 rotary transfer machine has improved Starro's ability to efficiently produce high-volume (multi-million-part) jobs, and the shop is discussing such work with Japanese and European automakers. The shop has proved to its satisfaction—and to several of its customers—that the rotary transfer machine provides the lowest cost per piece for jobs in cases where part quantities justify its use.

Mr. Dwyer points out that although the rotary transfer machine is best suited for multi-million part runs, its flexibility also makes it effective for family-of-parts production. "Being a job shop, we realize the importance of flexibility," he stresses. "We bought the C128 with family-of-parts production in mind. To set up the machine from scratch for a brand new part can take from 8 to 20 hours, but once the machine is set up, we can switch from one part to another within a family of parts in as little as 30 to 40 minutes. The machine features standard, modular, interchangeable machining units and brackets that not only speed setup times but also minimize or eliminate altogether the need for dedicated tooling."

Starro realized a 40 percent sales growth last year, following a 25 percent increase for the year before. The shop's strategy of paring costs and improving efficiency is paying off, and rotary transfer machines are a big part of the plan to give customers the part quality and price that they need. "Increasingly, the jobs that we are getting are tying up our machines for months and years instead of weeks," Mr. Dwyer notes. "To free up more of our CNC machines, we are currently negotiating for the purchase of our second rotary transfer machine from TPS."