Reengineering of a CAM Engine

Software suppliers are doing their part in meeting the programming demands of multitasking operations for complex parts.

Using the UKM engine, the CAM software is designed to provide highly accurate machine simulation on machines of virtually any configuration.

The software is designed for easy geometry creation and toolpath strategies for complex machines such as this B-axis twin-turn, shown with two tools cutting simultaneously.

As part requirements continue to increase in complexity and the trend for smaller lot sizes forces shops to rethink their approach to adding machine tools, multitasking machines are playing a more significant, growing role on the shop floor. Software suppliers are doing their part in meeting the programming demands for this shift as well.

At IMTS 2014, Gibbs and Associates (a Cimatron company), developer of GibbsCAM software for programming CNC machine tools, is introducing GibbsCAM UKM (Universal Kinematic Machine), the engine behind the upcoming release of GibbsCAM 2015. This CAM engine is completely reengineered, taking a new approach to how it will relate to machine definitions and machine tools. It blurs the line between the definition of mills and lathes. 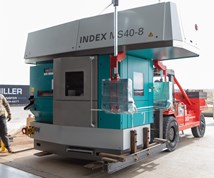 Bill Gibbs, company CEO and president, says, “CAM systems were designed based on the way mills and lathes were originally created to move. Mill-turns and multitasking machines started merging the two. GibbsCAM UKM was created from the ground up with no limitations. It can handle any number of axes in any direction, with multiple tools cutting simultaneously. With this software, users can program and accurately simulate virtually any machine today.”

The benefits of the engine extend throughout the entire product line, not just those areas relating to complex machines. Improvements to rendering and machine simulation help to give customers the confidence that what they see on the computer screen is what will happen at the machine. Machine simulation and post processors are built on the same kinematic model, optimizing the programmer’s time and ensuring complete accuracy.

The new UKM architecture is backward compatible, so current post processors and machine simulation models for GibbsCAM will continue to provide a return on investment. In addition, customers will be able to program and simulate the most complex machines on the market, including machines from Bumotec, Citizen, DMG MORI, Doosan, Matsuura, Mazak, Nakamura-Tome, Okuma, Star, Tornos, Willemin-Macodel, and others.

Significant changes have been made to the tooling functionality of GibbsCAM 2015. In addition to new tool types being added (barrel, dovetail, convex tip, E-style ISO insert, and tools defined by solids), the software now has dynamic 3D viewing of tools and toolholders in the tool dialog, allowing users to accurately visualize the tools they are selecting for the job.

An entire new category of tooling called Intermediate Tooling has been added. This feature allows for items that are neither tools nor fixed parts of the machine, such as fixtures (chucks, tailstocks, steady rests) and toolblocks (adapter blocks, holders for toolholders, and so on). Programmers can create libraries of toolblocks for easier setup of complex machines and can share those libraries across different parts, saving time and reducing errors.

The software is designed for significant improvements for a range of programming and machining processes, from geometry creation to toolpath strategies, including additional high speed machining (HSM) strategies. New functionality has been added to aid in the importing and machining of hole features. Holes are now treated as fully associative features of solid bodies, including those imported from SolidWorks, Solid Edge, Autodesk Inventor, or CATIA V5. Compound holes (holes with multiple segments that might each be tapered or threaded) are now supported, as well.

New geometry tools include improved spline editing and contour tracing capabilities. Improvements to machining include new adaptive roughing capabilities, pre-drilling and background processing for VoluMill, and many new capabilities for the Tombstone Management System, a comprehensive system for programming parts on a tombstone.