Wet blasting can replace the two-stage polishing and dry-blasting process to produce an ideal pre-coat surface for carbide cutting tools.

A key to the success of wet blasting for pre-coating is the process control that ensures consistent clean surfaces.

For aesthetic reasons, the inserts should be spray rinsed, cleaned and blown dry with warm air, leaving them ready for packaging.

It is well known that the geometry of a tool’s cutting edge is a key factor in its efficiency. Increasing edge radius generally extends tool life by helping it to remove metal more efficiently. The reasons behind this have been studied in detail by both research institutions and tooling manufacturers. 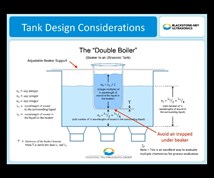 Webinar: Learn About the Next Level of Ultrasonic Cleaning 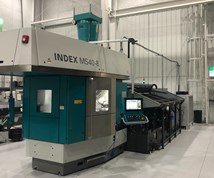 The hardness of the thin film is typically twice that of the substrate material (as much as HV3400, compared with HV1700 for a tungsten carbide tool). For this reason, the limiting factor in tool life is now often the bond between coating and substrate.

The substrate’s edge radius—and its surface finish—are, therefore, even more important to the tool’s final performance. The deposition process tends to deposit more material at sharper edges. Thus, a small edge cutting radius attracts a thicker deposit. Because this area is subject to high stress during cutting, it is more likely to fracture, resulting in an initiation site for accelerated breakdown.

To maximize adhesion between coating and substrate, the surface must be clean. In the study, “Cutting Performance Improvement through Micro-Blasting on Well-Adherent PVD Films on Cemented Carbide Inserts,” researchers found that simple grinding does not provide the ideal finish to obtain good coating adhesion. For this reason, inserts are usually ground and micro-blasted or polished and micro-blasted. The study found polishing and micro-blasting to be more effective. (In both cases, the micro-blasting is done by dry-blasting.)

Measuring the surface adhesion in this study was determined by repetitive inclined impact testing until surface damage was observed. An alternative comparative test—the simple C Rockwell hardness test—observes the damage around the indentation. On the HF scale, where values of 1 to 6 are expected, HF1 is the best result. It appears that a major benefit of micro wet blasting is to remove excess cobalt binder from the surface, which can otherwise affect surface coating adhesion. However, an edge radius obtained by brushing or dry blasting will have static buildup on the substrate, so the resulting debris or dust must be removed from the tool’s surface.

Now Vapormatt, in conjunction with other tool manufacturers, has found that wet blasting can replace the two-stage polishing and dry-blasting process to produce a quality pre-coat surface. Using the technique, a coating adhesion of HF1 is achievable with no surface static or dust.

A major advantage of pre-treating carbide tools using wet blasting—especially when followed by immediate downstream rinsing and drying—is that it leaves a surface that is extremely active. The surface is so active, in fact, that existing surface activity measuring devices (such as a goniometer, or Dyne inks methods) cannot detect it, as it is below their measurement threshold. This active surface further improves bonding of the coatings. A key to the success of wet blasting for pre-coating is the process control that ensures consistent clean surfaces: rinsing, cleaning in deionized (DI) water and immediate drying.

Just as a substrate benefits from post micro-blast processing, so the same is true of the coated tool itself. The aforementioned research tested both ground and micro-blasted and polished and micro-blasted tungsten carbide milling inserts. Examination of the PVD film after post micro-blasting revealed a superficial zone (about 0.6 microns deep) with large material deformation and elevated nano-hardness. Two blast pressures were used—2 bar and 5 bar. The latter produced a hardness in the superficial zone.

The tools were then subjected to milling cutting trials, in which the flank wear was measured. In the tests, the tool was considered worn out at 0.2-mm flank wear. Samples treated by grinding and micro-blasting saw a maximum 15-percent extension in tool life. But samples treated by polishing and micro-blasting—which can be replaced by wet blasting pre-treatment—saw a 70-percent improvement in tool life when treated at 5 bar.

Automated wet blast production lines are available that can carry out all of these functions, including edge radiusing, pre- and post-PVD/CVD coating, rinse, DI dip and downstream drying. For aesthetic reasons, the inserts should be spray rinsed, cleaned and blown dry with warm air, leaving them ready for packaging.

Cycle times for wet blast edge radiusing of a typical insert can be between 4 and 20 minutes for a tray of 200 inserts. Cycle times are dependent on how many stages are incorporated into the wet blasting machine. For pre- and post-coating, wet blast cycle times are about half that of the edge radius.