Bumotec’s S-191V is among the smallest VMT machine on the market, with only a 9 by 9-foot footprint. It’s ideal for applications such as watchmaking, medical and dental implants. (Photo courtesy of Starrag Group)

This Dorries VCE is on the larger scale of VMTs. Gravity helps with the setup of large parts. (Photo courtesy of Starrag Group)

This simulation of a Mazak Variax VMT is part of the programming package in Partmaker’s software. The machine uses its table configuration to present the workpiece in vertical or horizontal orientation.

Okuma’s MU 500VII is an example of a “table table” VMT and is applied to the manufacture of small to mid-sized workpieces. (Photo courtesy of Okuma America)

This simulation of a DMG DMU 125 FD is an example of a nutating head VMT. It shows another of the many variations that fall into the VMT classification.

Matsuura’s Cublex VMT is designed for manufacturing mid-range parts such as those found in the pump industry. (photo courtesy of Matsuura USA)

VTL is the acronym for a vertical turning lathe, a lathe in which the part is fixtured by laying it flat and clamping it on the machine’s table. The cutting tools then approach the part from a vertical orientation, rather than doing so in the horizontal direction, as would be done on a traditional lathe.

Blending multitasking operations, especially milling and turning onto a single machining center based platform, is taking vertical part processing beyond the classic VTL configuration. In order to create a better descriptor of this new machine tool class, the acronym VMT is being proposed.

Beware of False Unemployment Claims Filed with Your Information 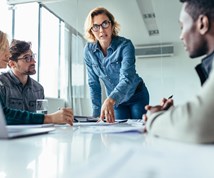 Leadership Problems in a Digital Age

VMT stands for vertical mill-turn. Most metalworkers haven’t heard this acronym before because it has recently begun to enter the machining vernacular. In fact, it’s a term Delcam’s PartMaker division coined after years of R&D in developing a CAM programming solution for this unique breed of machine tools.

David Fischer, lathe product specialist, Okuma America, says, “The break point between a VTL and VMT occurs when the machine comes with an automatic tool changer.” Once a vertical machine has a fully powered milling spindle as well as turning capability, it can be considered a VMT.

VMTs come in a variety of shapes and sizes. From a size perspective, although typically associated with large parts appropriate for VTLs, VMTs run the gamut. On the small end of the spectrum is an offering from Bumotec, which fits conveniently into a 9 by 9-foot footprint. Things get bigger from there, from machines that can support mid-range to small diameters with 8-inch chucks all the way up to machines for monstrously large parts, parts that are so big that just moving them around a shop is an engineering exercise.

A variety of different builders offer machines that fall into the VMT category, including such familiar names as Okuma, Matsurra, Mazak, DMG MORI, the Starrag Group, Brother, and Hermle, among others.

No matter the size of the part or the machine, the concept behind the VMT is the same. Bill Archer, market sales manager for Aero Engine and Power Generation for Starrag Group, says, “When you move a part between machines, you’re not making money. You can lose both time and precision.”

In the case of VMTs of the “head-table” variety, their architecture can be further complicated by the inclusion of a nutating head. A nutating head is a milling spindle which has a non-orthogonal rotation axis. The DMG DMU 125 FD is a good example of such a machine, where the head pivots around a 45-degree plane when positioned to do five-axis machining. The benefit of a nutating head architecture is that the cutting tool can be positioned and moved to work at different angles around the workpiece to more productively make complex parts.

Delcam is no stranger to VMTs. In fact, it owns one that resides in its Advanced Manufacturing Facility (AMF) at the corporate headquarters in Birmingham, England. To do the R&D necessary to prove out the operability of software developments, Delcam maintains a modern machine shop to test these latest software developments. The center also houses a professional services group that troubleshoots questions from the field. This hands-on machining experience provides a good idea of the manufacturing benefits VMTs provide.

“A typical five-axis mill is going to be able to generate complex geometry, but it’s not going to be as efficient and accurate for turned features. Using a single-point tool and turning the feature is going to be a lot more accurate and faster for certain geometries,” says Brett Hopkins, North American manager for Delcam’s professional services group.

“Using single-point, you generate much better surface finishes. For example, for certain aerospace parts, there can be cases where you need a certain quality of surface finish that you can only get from turning,” Mr. Hopkins says.

Like VTLs, VMTs use gravity as a natural assistant in part manufacture. “Gravity helps with part loading. It helps to hold onto the part,” Mr. Fischer says.

The use of gravity can also be helpful in making thin-walled parts, according to Mr. Fischer, as the vertical concept can allow you to have to grip such parts less tightly and avoid any possible deformation that could occur from the use of excessive clamping force.

Like any multitasking application, the primary benefit of the VMT is the ability to finish a complex part complete on a single machine. This benefit takes on a particularly important meaning in the world of large part manufacturing, where just moving a part around the shop can be an exercise in industrial engineering.

Part fixturing and origin identification also can be challenging. By avoiding performing multiple fixturing and error-prone part datum relocation and finding, VMTs can remove the chance of making errors and thus making scrap or performing time-consuming rework, all of which costs money.

Despite their benefits, VMTs do have some limitations versus traditional horizontal applications, particularly when it comes to versatility. VMTs don’t allow for much, if any, work on the back side of a part the way a machine with a subspindle would. Despite this obvious limitation, Mr. Fischer believes the VMT “can’t be beat for what it does well.”

Applications for VMTs can range down to the size of the machine being considered. Applications for small VMTs such as Bumotec’s S191V can be found in the watchmaking and dental industry. More mid-sized machines such as Matsurra’s Cublex series can be well suited for the manufacture of pumps and valves.

“VMTs can be ideal for large sealing pump surfaces where you can’t have tool marks from milling interpolation,” explains John Shafer, V.P. of engineering at Matsurra USA. “Turning such features allows you to have one smooth, turned surface.”

As part sizes get larger, more typical applications are going to be found in the aerospace, construction, rail and power generation.

“The aerospace industry often needs parts that have a number of milled and turned features, though they are largely milling parts,” Mr. Hopkins says. “Having the ability to turn certain features can be more accurate than 3D surface machining, which makes the application of these machines ideal for a number of large aerospace parts.”

All the capabilities of today’s VMTs mean programming them efficiently is key to harnessing their capability in a productive way. When getting into the multitasking arena, the stakes involved in performing new part setup are critical, and new parts can’t be processed efficiently if they cannot be programmed quickly and, more importantly, accurately. Given the geometric complexity of the sorts of parts that would be appropriate for a VMT, a CAM system is going to be a required piece of technology for anyone using a VMT.

As many VMTs are focusing on large parts, the accuracy of the CAM system from both a simulation and NC code-out perspective (post processing) are going to be particularly critical. When dealing with large parts versus small parts, mistakes simply cost more.

With small parts, while the cost of an inaccurately, manually written, or CAM-generated NC program is high, NC coding errors can mean a huge loss on a VMT because a gouge in the workpiece can lead to an expensive piece of scrap. This cost is in addition to the cost of machine downtime if a significant amount of time needs to be spent debugging the NC program at the control during setup.

“With a flexible machine, you need a flexible CAM software, one that addresses all the part processing possibilities on a VMT, including all sorts of various clamping scenarios,” says Michael Scott, applications engineer at Bumotec.

In its Version 2015, Delcam’s PartMaker offers a powerful, yet easy to use solution for automating the programming of VMTs. At the heart of this solution is a dedicated, graphical user interface that lets the programmer envision a part the way the machine will make it. This visual approach makes the programming workflow intuitive. This solution for VMTs also includes machining strategies needed to program the types of complex parts generally being manufactured on these machines. It includes a vivid 3D simulation feature to check for errors or tool collisions and accurate post processors to ensure the software generates correct NC code.

“From a programming perspective, it’s important to understand how the machine is thinking. It can be difficult to adapt a horizontal approach to a vertical environment,” Mr. Fischer says. “If the software is set up the same way the machine is set up, programming can be made a lot more intuitive.”

In PartMaker, this process starts from the beginning of the programming process in the software’s setup dialog, where the user has the ability to clearly specify that he is working on a vertical mill-turn, as opposed to other fixed headstock machine configurations such as a traditional horizontal turn-mill or bar-fed mill. Through the years, this approach has served programmers well, with end users applying such a machine-specific programming approach to a variety of machining platforms, from horizontal mills to Swiss-type lathes.

Once the user has indicated a VMT is being programmed, there is a choice to select the sort of architecture his machine has, such as whether it is a table-table or head-table type configuration. Based on these selections, which are accompanied by explanatory pictorial diagrams, the software configures itself to the programmer to accept CAM programming information with the needs of the VMT taken into account.

Perhaps most important, once the tool paths have been applied to the part geometry, the 3D simulation shown in PartMaker has the ability to show a VMT in a virtual reality-like manner, displaying the exact machine kinematics in 3D graphics. Any collisions or errors that might occur to the part or in the machine environment can be detected automatically here.

Last, but not least, the software vendor’s support for VMTs includes an accurate and robust post-processing function to ensure correct NC code is being generated for the specific machine control combination being addressed.

In the world of CAM, while a picture tells a thousand words, it’s accurate NC code that pays the bills. With PartMaker’s solution for VMTs, the user gets both an intuitive system designed around the unique kinematics of the specific machine tool along with accurate simulation and NC program development to ensure the results seen on screen are the same as the ones on the machine tool when it’s time to cut the part.

Continuous improvements in machine tools, controls and programming software are moving the industry forward. Each component needs the other, and actually, many others. The key for the manufacturer is to understand this interdependency and take advantage of the systems that work best together.