It is this goal of keeping the machines running that Schwanog LLC (Elgin, Illinois) has set its sites on helping its customers accomplish. Since modifying its direction about 18 years ago to specialize in indexable form tools, the company has been increasing tool life and providing fast turnaround to help shops reduce machine downtime.

Depending on the form requirements, Schwanog will use either grinding or EDM to produce inserts. In addition to this grinding machine in production at the Elgin facility, another machine is scheduled to be delivered in March.

For a shop to reach its maximum level of productivity, it might set out to implement a number of strategies. These strategies could include making use of better, longer lasting tooling, hiring more skilled machine operators or implementing leaner processes. However, the ultimate goal is to keep the machines producing parts for as long as possible, and each of these strategies should provide a means to this end.

It is this goal of keeping the machines running that Schwanog LLC (Elgin, Illinois) has set its sites on helping its customers accomplish. Since modifying its direction about 18 years ago to specialize in indexable form tools, the company has been increasing tool life and providing fast turnaround to help shops reduce machine downtime. 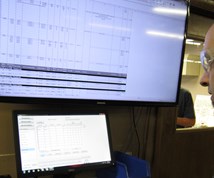 Schwanog LLC focuses its efforts on providing quick turnaround of high-quality indexable form tools for the North American market. The company was incorporated in 2004, but the German leg of the company was represented in the United States long before that by GST Tooling. In Germany, Schwanog began about 75 years ago with general machining applications such as parts washers and conveyors and quickly moved into making parts for the watch industry. In the early 1990s, the company made a move to further diversify and decided to specialize in interchangeable tooling.

Under the GST name, Schwanog maintained manufacturing facilities in Indiana, with customer service operations in Schaumburg, Illinois. As of December 31, 2005, GST Tooling was dissolved, and since February of 2006, all North American Schwanog operations have been moved to a central location in Elgin, Illinois. The company continues to grow its presence in the niche market of custom indexable tooling for external work.

According to Holger Johannsen, general manager, “We’re not different from our competitors because we offer an indexable tooling system. Profiling a tool also does not separate us. Having a system in place to deliver a quality tool quickly that can take a shop from 5,000 parts to 50,000—that’s what drives our business.”

Targeting batch sizes in the range of 20,000 to 50,000 or more per cutting edge, Schwanog has two types of customers, as described by Mr. Johannsen. “About 20 percent buy blanks and put the profiles in by themselves. The rest are buying the finished inserts. These customers send us a part drawing generally by e-mail from which a form tool drawing with a unique tool number is being created that is later used for reording. The tool drawing is electronically forwarded to the customer for approval. Within 1 to 2 weeks, the inserts are delivered and cutting parts.”

Once the inserts are cutting, the quality really comes into play. Mr. Johannsen cites an example of a customer that originally machined its own inserts from blanks. These inserts lasted for 5,000 parts. Schwanog provided inserts that, with the first cutting edge, produced 50,000 parts. Then, the insert was indexed and produced another 25,000 parts. The increase in the number of parts alone more than made up for the difference in price, but that is the smaller picture. More important is that the machine was not down nearly as long. When the machine is down to switch tools, however, it is only for about a minute because of Schwanog’s interchangeable system and its repeatability of the tools.

It is this logic that allows a shop to be more competitive because more parts in less time means lower part prices. What allows these inserts to be so effective? The company uses refined grinding and EDM techniques to produce a finer (sharper) tool nose edge on its carbide inserts.

The ideal production of the inserts involves grinding. With a Haas Multigrind machine on the floor in the production facility in Elgin and one more on order, due in March, Mr. Johannsen feels the company can produce state-of-the-art inserts. The grinding machine uses a Siemens controller, with programming written by Haas Multigrind. Schwanog, though, has modified the programming and added a self-developed tool handling system to fit the company’s needs, allowing unmanned operation and production of the cutting tools.

Although EDM does not produce quite as good of a cutting surface on the inserts, sometimes it is the only option, depending on the form. The company is using Agie Challenge machines for wire cutting inserts and toolholders. A new machine is on order and due in March.

When Schwanog began in the indexable insert market in the United States, 80 percent of its business was in the automotive industry. Gradually, the company’s ability to supply quality inserts with fast delivery has allowed it to move heavily into the medical field, currently with about 50 percent of its business there. It is areas such as this, where orders are smaller and fast delivery is even more significant, that spindle utilization pays off most.