Like many turning based shops, Clippard Instrument Laboratory first applied vertical machining centers to perform secondary operations on its screw machined parts. That view has changed for the better.

Operator/programmer and setup person, Sharon Sbarbati, is a 35-year veteran at Clippard. She runs one of the Brother production cells.

:: Clippard applies its own engineering and products to workholding on the shop’s VMCs.

The addition of the Haas vertical machining center has helped Clippard move from secondaries to primary milling operations. The manifolds (inset) are an example of new capability made possible by this technology.

When William Leonard Clippard founded his company in 1941, its original product line consisted of electrical test equipment and radio frequency coils. To test the coils, Mr. Clippard needed small, non-electric components to hold the units for testing without any electrical interference. 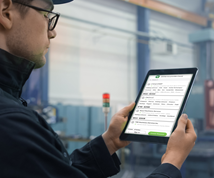 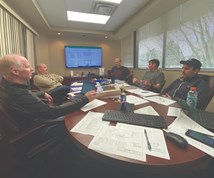 Searching for a source of miniature, non-electric pneumatic devices to aid in the manufacture of his products, Mr. Clippard found that no one made such devices. So he decided to make his own using pneumatics as the actuation mechanism.

Figuring that others might be interested in such devices, in the 1950s Mr. Clippard introduced the Minimatic miniature pneumatic component as a new product line. The radio frequency coils may be gone, but the Minimatic line they inspired now offers more than 5,000 standard components in its catalog and operates from two manufacturing facilities in greater Cincinnati and one in Europe.

Today the company is operated by the founder’s sons, President William L. Clippard III and Vice President Robert L. Clippard, with the third generation of the family also involved in the company.

Good machines don’t necessarily go away, and today Clippard has 12 Brown & Sharpes, upgraded with Servo-Cam, and four Warner & Swasey multis cranking out parts. “For a long time, we had a lot of manual equipment requiring many operations to produce a finished component,” Mr. Rutschilling says.

Part of the company’s culture is based in continuous improvement, and to that end, Clippard invested in its first CNC equipment in 1986. That machine was a Brother drilling and tapping center purchased to perform secondary operations that previously were done manually on drill presses and other manual machines. Today, the shop has 13 Brother machines on the floor.

The big leap for Clippard or any shop migrating from manual machine tools to CNC is the question of programming and fixturing. “For the programming, we used conversational MDI and trained our operators on how to input the program at the machine,” Mr. Rutschilling says. “It’s a system we still rely on for much of our more basic CNC work. Most of our machine operators do setup, programming, measuring and deburring in small cells located at the machine.”

Clippard uses a pull through system for inventory control, which ties into production scheduling. When inventory is depleted to a predetermined point, the shop floor is alerted to run replacements. Because many of the components are repeat standard orders, once the program is initialized and proven, it is saved off-line where it can be called up as needed at the machine.

“For fixturing, we began to design and build workholding devices using our own products as actuation devices and scaled those up over time to get more parts off the machines,” he continues. “Many of the early simpler fixtures have evolved into fourth-axis capable fixtures that we’ve applied to most of our machining centers.”

In addition, Clippard has applied its pneumatic cylinders to automate various pieces of auxiliary equipment such as barfeeders. “It’s nice to have access to in-house design, engineering and manufacturing to automate what we need,” Mr. Rutschilling says.

Although the CNC Brother machines were used primarily for secondary operations, they established the infrastructure bridge (CNC programming being a critical component) from manual to CNC for the shop floor. Putting those first CNC machines into the mix produced dramatic throughput improvements for Clippard and gave the company the native knowledge to go further into CNC technology.

With CNC technology firmly established in the shop, in 2001 Clippard ventured into Swiss-type machining with the purchase of a Citizen lathe. In 2007, the company added a Ganesh Cyclone to the turning mix. Today, the shop has three Citizens, one Star and three Ganesh Cyclones.

“These precision turning machines have helped us move into ever smaller and more precise components for our miniature pneumatic products,” Mr. Rutschilling says. “Customers are demanding ever more compact components, and we need the manufacturing capability to deliver them.”

It was the foundation laid in the 1980s with the installation of those first CNC drilling and tapping machines that has enabled the shop to move itself up the technology curve. “Once you can program a three-axis drilling and tapping machine, it’s not a huge leap to program other machine tool types,” Mr. Rutschilling says. “We try to do most programming at the machine, but have added an off-line CAM package for more complex workpieces. We use Partmaker for these parts.”

From Secondary to Primary

Although the Brother drilling and tapping centers performed and continue to perform their assigned secondary operation tasks well, there came a time when Mr. Rutschilling’s shop floor needed more machining capability than these machines could supply. “We needed a larger, more powerful machine with more toolholders, which led us to the Haas VF2 vertical machining center about 4 years ago,” he says. “We now have two.”

These more capable machining centers are central to an in-house product development program that Clippard calls its Value Added Department. Basically, the Haas machines allow Clippard to manufacture a new class of components that did not and probably would not exist without the milling capability of these machine tools.

In an effort to open up the market a little bit and do more in-house custom work for their customers, Clippard has initiated a program that blends its engineering expertise in pneumatics with its component manufacturing capability. Initially this has taken the form of designing, engineering and machining manifolds, which traditionally the customer would make for themselves.

“The way it works now is our distributors and regional sales managers will bring us a solution or a problem that a customer may be having making a component work,” Mr. Rutschilling says. “With our experience with pneumatics, we will engineer a proposed solution and submit it to the customer for approval. Once the customer has signed off on the suggested component, we can now manufacture it in-house.”

Having the milling capability to machine these larger manifolds has been the enabler for acquiring this work and in turn doing more for Clippard’s customers. “We could not have machined these larger parts, some from stainless steel, on our existing machining centers,” Mr. Rutschilling says.

“Now we are able to take a solid model right from our engineering department, run it through Partmaker and generate a toolpath program for machining it on the VMCs,” Mr. Rutschilling continues. “We first run prototypes and prove out the program before putting the component into production. That’s the value added proposition, from concept through assembly and testing. These are line-ready components that the customer can take from the box and use.”

Like many shops, Clippard sees this continuous growth of manufacturing capability as a trend for its business. Using in-house expertise (140 of its 200 employees are involved in manufacturing) in concert with continually upgrading manufacturing capability can and does unleash potentials for growth. Manifold machining and line-ready component assemblies are a small fraction of Clippard’s global business, however, it is incremental business that resides along the company’s core product line and represents another arrow in the quiver of capability.

“We can now design, build and test manifolds, and we see a lot of growth for us in that area,” Mr. Rutschilling says. “Historically, we built the pneumatic components that would end up in some sort of manifold. Often these components might not be the optimal solution for the job. That’s where our expertise in flow, control and actuation can really play large, and moreover, give the customer assurance that the complete system component is well engineered, built and performance tested— all made possible by adding milling capability to the shop floor.”

Currently Mr. Rutschilling is looking at adding horizontal machining center capability to the shop’s production mix. “An HMC would allow us to drill deep, long holes in a more efficient way than we can now,” he says. “Currently these smaller manifolds are produced one at a time on the Brother machines. Being able to gang the parts on a tombstone fixture would make the process much more efficient.”

And that open mindedness toward new ways to do the job seems to be a direction many shops like Clippard are moving. Mr. Rutschilling is active nationally and regionally in the PMPA and visits many member shops. He has seen first-hand the advantages of expanding a shop’s capabilities.

The trend toward CNC is undeniable as screw machines are increasingly available with it. But for manufacturing to grow and prosper, it’s vital that younger people become involved and for older people to take on the task of training and mentoring.

Clippard is involved with local trade schools and uses them for recruiting new employees. “Ten years ago, the trade schools we are involved with didn’t have much in the way of CNC equipment,” Mr. Rutschilling says. “They were teaching on manual machines. Today, that has changed as shops like ours work more closely with trainers to establish useful curriculums that equip the students with skills employers need. It’s been a boon for us.

“What I want from these graduates is a basic knowledge of machining; what is chatter, how to get rid of chatter, oversize and undersize work dimensions and how to work with that,” Mr. Rutschilling continues. “I don’t want a button pusher. And, our company is dedicated to doing its part by working with the area schools to communicate those needs. It’s good for Clippard and good for manufacturing in general.”

In his travels through various shops Mr. Rutschilling sees a definite trend toward mixing and matching screw machines and CNCs. Few shops can make it exclusively in screw machining today and our shop is a perfect example of that blending of technology, says Mr. Rutschilling.

“On our screw machines, we get 50 to 60 percent run time,” Mr. Rutschilling says. “That is affected by the nature of the machine tool itself, bar loading, stoppage for chip removal, part removal and tool changes, and they still have a place in our production mix. However, on our CNC machines running brass with bar feeders, we can get 16 hours of run time per day on one shift. That’s 8 hours manned and 8 hours untended. That’s the direction I see many of the shops I visit moving.”