Ductility as Measured by Tensile Testing

In this article, I will describe how to measure ductility and use it to predict behavior based on values reported on certs and test reports.

The ability of a material to deform plastically without fracturing is called ductility. In the materials usually machined in our shops, ductility is measured by determining the percent of elongation and the percent reduction of area on a specimen during a tensile test.

In this article, I will describe how to measure ductility and use it to predict behavior based on values reported on certs and test reports. 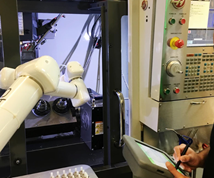 The percent elongation and percent reduction of area values shown on our test reports and material certifications from our material suppliers indicate the ductility of the material tested.

In the tensile test, a cylindrical specimen is gripped securely and subjected to a uniaxial load and elongated until it breaks. At the end of the test, the pieces of the fractured specimen are fi tted back together again, and the change of length between the two gage marks put on the specimen before testing is determined. The change is then expressed as a percentage of the original gage length.

The percent reduction of area is determined by measuring the minimum diameter of the broken test specimen after the two pieces are fitted together, and the difference is expressed as a percentage of the original cross sectional area prior to the test.

The differences in measurements after tensile test are used to calculate the percent elongation and percent reduction of area.

A minimum of 12 percent elongation is recommended for consistent, trouble-free thread rolling applications.

Rolled threads are stronger, so having the ductility to thread roll is important. However, too much ductility makes it diffi cult to get the chip to separate by cutting. Low ductility can be problematic for cold deformation manufacturing processes such as thread rolling, cold forming, swaging, staking and crimping.