This technological innovation has been increasing in popularity as well as multitasking sophistication.

The B axis has the ability to pivot on the Tsugami SS207 Swiss machine equipped with full five-axis contouring capability. The full simulation software is designed to provide accurate and safe offline prove-out of a complex, five-axis program.

:: A Ganesh BY2’s (left) B-axis gang tools are engaged in the cut. The engineering drawing shows the kinematics of the rotating B axis.

This machining function setup window from PartMaker shows how a local coordinate system can be set when performing five-axis machining.

A “B axis” is the common machining industry term for an articulating tool that is capable of moving in an arbitrary five-axis plane rather than being restricted to the traditional live tool motions found on a Swiss machine where a milling cutter can be positioned perpendicularly to either the diameter or the face of the part. The “B” refers to the letter address typically given to these axes on multitasking lathes capable of machining in five axes. The name “B-axis lathe” has become machining industry shorthand for describing lathes with programmable, articulating milling spindles. 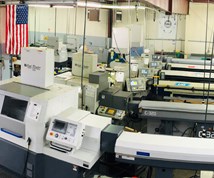 Speed makes the new, gang-based programmable B-axis machines appealing. These machines combine the power of the B axis with the speed of the gang slide tool index time.

For a new technology to catch on and become successful, it needs to solve an existing problem. Gang-based, B-axis Swiss architectures address a number of application challenges that until now have been cumbersome and expensive to solve.

As lot sizes continue to dwindle, part complexity increases and leadtimes shrink, CNC Swiss users are under mounting pressure to improve their setup times. The market for small precision parts has changed a lot over the last 10 years as a result of these three paradigm shifts, and the advent of gang-based B-axis technology is another step in helping the industry keep pace.

Angled features such as inclined flats or holes can benefit from this technology. From a hardware perspective, they have required the need to purchase costly angled milling attachments. These attachments are typically mounted on a turret, which means if you want to drop a part complete with angled holes, most likely you will need to have a turret-based Swiss machine, although angled attachments for gang-based Swiss machines are becoming more readily available.

These attachments can be cumbersome to set up mechanically and can only be set to one angle per job, which means if a job has features at multiple angles or even at the same angle, but requires multiple operations, it may need multiple angled attachments for a single job. This can make the cost add up quickly. At the same time, such attachments take up a live tooling station, and thus decrease capacity for additional live tools for that job.

Also, angled attachments are aftermarket attachments, hence they are sometimes not well integrated into the machine’s CNC control firmware. Programming features using these attachments can be rather cumbersome and time consuming to set up because they are more complicated to program.

“Many applications use B axis simply for multiple angular drilling,” according to John Antignani, executive V.P. at Marubeni-Citizen Cincom. “For those applications, we are offering adjustable angle toolholders on our simpler gang-style machines. However, there are parts like angular dental abutments that do require full B-axis capability, so as a result, we developed a programmable B-axis capability on our flagship machine, the Citizen M4, to satisfy this demand.” Mr. Antignani envisions this capability filtering down to Citizen’s other machines in the near future.

Here are the biggest benefits of having a gang-based Swiss machine with a programmable B axis:

More live tooling stations, same sized machine: One of the primary benefits of having a programmable B-axis, gang-based Swiss is the ability to have more milling stations than would be offered by conventional gang-style architecture. On a classic gang-based Swiss machine, live tools are fixed in their orientation with respect to the part, that is, they are aligned either perpendicularly to the diameter of the part or to the face of the part.

Some gang-based Swiss machines offer the ability to have a live tool oriented perpendicularly to both the face and diameter of the part; however, this requires using two different live tooling stations. With a programmable B-axis equipped gang-based Swiss machine, you can use one live tooling station to do the job of two, even if you are only making features that are parallel to the face or diameter of the part, by rotating the B axis from a position of 0 to 90 degrees.

Imagine a part with two 0.125-inch-diameter tapped holes, and one hole is on the O.D. and the other is off-center on the face. Each feature might require three tools—for example, a spot drill, drill and tap—oriented differently. On a conventional, gang-based Swiss machine, these two simple features could occupy upwards of six live tooling stations. On a Swiss machine with a programmable B axis, the same two features could be manufactured with only three live tools, leaving three additional live tooling stations for other features on the part. One could easily see where doing so could be the difference between dropping a part complete and having to perform a secondary operation.

More easily created angled features such as angled cross holes: There are a number of features, such as angled cross holes, which up until now required the use of angled milling attachments to perform. Such milling attachments are problematic for a variety of reasons, from their cost to their complexity to program to the fact that they just might not be compatible with a shop’s current line-up of machines.

“The primary convenience of having the B axis is the ability to manipulate the tool to any angle in very precise angles. This can be slow and tedious to set up using traditional methods,” explains Larry Greenawalt, engineering manager for the Eurotech SwissTurn machine. “With a programmable B axis, it’s just a matter of programming that angle. Adjustments can be made with offsets or in the program.”

A B-axis equipped gang-style lathe will typically come with a control feature known as 3D coordinate system conversion. Much like plane selection functions such as G17, G18 and G19, this feature allows the programmer to define a datum on an inclined plane, and then program from that “local” coordinate system with dimensions that correlate clearly to those of the part. Without a 3D Coordinate System Conversion function, as is typically the case when using bolt-on angled attachments, NC code must be calculated using “a global coordinate system,” which forces all NC code to be entered in long hand format without the benefit of common programming assistance such as canned cycles and cutter radius compensation. Programming angled features using 3D Coordinate System Conversion is typically known as “3 + 2” machining.

There are a number of small parts that require simultaneous five-axis machining, including parts with veins or blades. Another complex part often targeted for manufacture on a B-axis Swiss machine is a dental implant known as an angulated abutment. This is a medical device whose body is not parallel to the long axis of the dental implant. It is used when the dental implant is at a different inclination in relation to the proposed tooth replacement. In the past, if a shop wanted to make a small part that required five-axis simultaneous milling, the only choice was to make that feature on a five-axis mill. With a five-axis simultaneous B-axis equipped Swiss-type lathe, a shop can now drop even the most complex variety of parts complete from a Swiss-type lathe.

“Contouring in five axes is needed for a number of irregular shapes such as impellers and medical devices where the surface plane is continuously changing,” explains Matt Lamoureux, engineering manager at REM Sales (Tsugami). “While cutting on these surfaces, the centerline of the cutter must continuously change as well.”

By using five-axis simultaneous machining, it is possible to keep a tool perpendicular to a surface at each point in the cut. Cycle time can be improved using such techniques by allowing an operator to use flat bottom end mills across a surfaced feature and stepping over by the cutter’s full diameter and thus taking fewer passes.

The same principle applies to side milling of angled features, a technique typically referred to as five-axis swarfing. While reducing cycle time, these techniques also improve surface finish by allowing the elimination of the scalloping or ribbing effect typically caused by ballnose end mills.

A CNC control’s RTCP function manages all irregularly shaped offsets automatically and keeps the tool in contact with a programmed point. It uses the contact point as a reference point in all calculations, allowing users to directly program the machine using the part contour and a desired tool angle.

RTCP is generally an expensive control option that not every B-axis Swiss machine will have as a standard control feature. Some programmable B axis-equipped Swiss machines only have the ability to perform four-axis simultaneous machining and as such do not have RTCP. Not having an RTCP-type function and full five-axis contouring on the machine could make trying to perform even four-axis simultaneous machining extremely cumbersome to the point of being impractical.

“Without five-axis software on the machine control, the B axis is just a positioning axis that can only be parked at a given angle,” Mr. Lamoureux explains.

No matter which of the benefits of B-axis Swiss lathes a shop hopes to take advantage of, all of them will need to be programmed. If an operator cannot confidently and productively program the functionality, they may be forfeiting many of the setup time reduction benefits.

Also, the 3D simulation facility offered by an appropriate CAM system is critical to success when programming a B-axis equipped Swiss-type lathe. Increased part geometric complexity can bring increased risk of machine and tool collision if errors are made. With the use of its full machine simulation module, Delcam’s PartMaker provides a photorealistic simulation of a B-axis enabled Swiss machine’s kinematics to ensure the part is running collision free before committing resources to actually setting up and running the part.

No discussion about CAM software and sophisticated, multitasking programming would be complete without touching on the issue of post processing. A post processor is the utility that converts the graphical and process data inside of a CAM system into a program the machine tool can understand.

The productivity of offline programming without a robust, accurate and reliable post processor for the given machine chosen could be a very futile exercise. PartMaker has worked closely with a number of machine tool builders and their customers to develop both robust post processors and full machine simulation kits to support the comprehensive and accurate programming and simulation of this new breed of highly capable machine tools.