A solid relationship with a solvent manufacturer has aided Electro-Spec Inc. with the implementation of a trichloroethylene replacement material in its vacuum degreasing unit to clean a customer’s micromachined parts more efficiently.

When an environmentally conscious company sees it has been using a material for years that showed up on the Environmental Protection Agency (EPA)’s list of top 10 hazardous wastes to eliminate, the staff reacts quickly to find a way to stop using that product.

Electro-Spec Inc. (Franklin, Indiana) had been using a trichloroethylene (TCE) solvent, one of these hazardous materials, in its Tiyoda vacuum vapor degreasing unit for years. When the solvent came up on the EPA list, environmental health and safety director Ben McKnight led a research project to find an alternative to this hazardous chemical. As members of an environmental stewardship program and members of a program sponsored by the Indiana Department of Environmental Management—Partners for Pollution Prevention—Electro-Spec needed to live up to its drive for environmental excellence, and therefore minimize or eliminate hazardous waste.

“With the exception of TCE, our facility would be exempt of hazardous waste at the time,” says Mr. McKnight, who is also the executive director for Partners in Pollution Prevention. 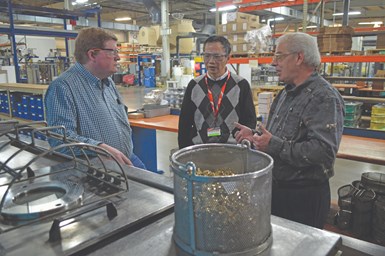 “We are so fortunate to have found BHC,” Mr. McKnight says. “We have found an excellent partner in them to help us stay environmentally friendly.”

The two companies’ chemistry isn’t only about the degreasing product — they have formed a strong relationship that goes both ways to moving toward their goals as environmental leaders in the industry.

Parts Cleaning Editor Lori Beckman interview with Ben McKnight from Electro-Spec and Yangsheng Zhang, Ph.D., director of research and development at Brulin, on how the project is progressing.

It Hasn’t Always Been Easy Being Green

As a precious metal electroplating company since 1959, Electro-Spec plates parts for the automotive, aerospace, military, battery, telecommunication and medical industries. Often customers ship micromachined parts to the company that have yet to be cleaned. When this happens, Electro-Spec uses its vacuum vapor degreasing system prior to plating the parts that are made of copper, copper alloys, steel, stainless steel, Kovar, nickel, titanium and aluminum. 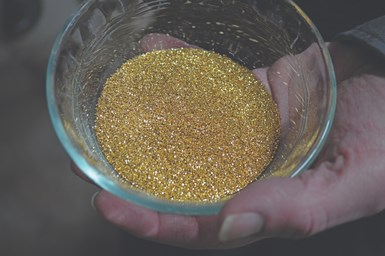 Often, customers ship micromachined parts to the company that have yet to be cleaned. When this happens, Electro-Spec uses its vacuum vapor degreasing system prior to plating the parts that are made of copper, copper alloys, steel, stainless steel, Kovar, nickel, titanium and aluminum.

“We need a degreasing product with very good wetting ability to be able to get into the recesses within these micromachined parts to remove soils,” Mr. McKnight says. “Therefore, we need a solvent that is less viscous—able to clean out recess areas in very small parts.”

Prior to looking outside of the company for help with their problem, Greg Wilkinson, a chemist at Electro-Spec, combed a list provided by the EPA with TCE-alternative cleaners. “I spent about two days looking through this list and found zero solvents on it—they were all aqueous cleaners.”

Aqueous cleaners, although environmentally safe, often do not come out of the recesses in the very small parts that Electro-Spec is cleaning. Therefore, a lower viscosity solvent was in demand for this particular application, but also not a solvent that is too viscous to clean inside the tiny areas of the parts.

When the company began working with BHC, it offered samples of Vapor Solv. Electro-Spec used its own SEM/EDX equipment to test soiled parts, then clean them with this newfound solvent and then test them again using the SEM/EDX equipment. After the initial testing results came back positive, the company transitioned to a pre-production scale of the solvent, where it used about 20 gallons of the material.

“I kept track of running samples,” Mr. Wilkinson says. “I ran more than 85,000 parts or 100 loads. The parts range from copper to stainless steel to brass and many types of finishes. Very few of them had defects, and none of them had defects from having been degreased improperly.”

The New Solvent Solves the Problem

Understanding that his customer did not have the freedom to switch to an aqueous product because of the application, Yangsheng Zhang, Ph.D., director of research and development at BHC, realized Electro-Spec’s dire need to be environmentally friendly, yet also produce the cleanest parts without leaving behind traces of cleaning solvent on their parts.

This application requires a degreasing product with very good wetting ability to be able to get into the recessed areas within these micromachined parts to remove soils. Therefore, it needs a solvent that is less viscous — able to clean out recess areas in very small parts.

“We have been very active with precision cleaning industries using our different chemistries,” Dr. Zhang says. “We are helping clients become more environmentally compliant. We are helping the industry transition to safer choices. Aqueous solutions have their limitations in certain applications, so we are looking for safer solvents to augment the aqueous product lines.”

SolVantage Vapor Solv is one of these environmentally safer products that BHC has developed. The product is a non-flammable, high performance, precision cleaning solvent particularly designed for vapor degreasing. An azeotropic, fluorinated solvent degreaser, it is safe on virtually all metals; it is non-corrosive and will not stain metal parts.

Vapor Solv also has a very low surface tension, which Dr. Zhang says is especially critical when cleaning micromachined parts as Electro-Spec does. “Lower surface tension helps the cleaner to get in and out around the small holes on the parts or gaps between stacked parts,” he says. Water has surface tension of 72 dyne/cm. With the presence of surfactants, the formulated aqueous cleaners can get close to the low 30s in dyne/cm. “Formulated solvent degreasers, on the other hand, can easily get below 30 dyne/cm, which is often needed to clean micromachined parts. Vapor Solv has an estimated surface tension of 14 dyne/cm,” Dr. Zhang says.

Dr. Zhang’s job, he says, is to help his customers succeed. “If they are successful, we are successful,” he says. “Our development ideas come from the customer. We don’t develop products in a vacuum that don’t answer issues in the real world. We are getting ideas and directions from the industry we serve.”

After the trial of the new solvent was deemed successful, Electro-Spec converted its vacuum vapor degreasing process to become compatible with the new material. 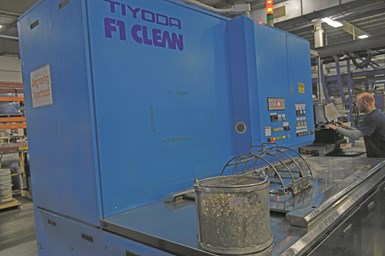 Electro-Spec used trichloroethylene (TCE) solvent in its Tiyoda vacuum vapor degreasing unit for years. When the solvent came up on the EPA list of top 10 hazardous material, environmental health and safety director Ben McKnight led a research project to find an alternative to this hazardous chemical.

“This only involved changing a few gaskets, but we had to change those periodically anyway; we just put a different type of gasket in instead,” Mr. Wilkinson says. “It wasn’t a problem or a challenge.”

Not only was the transition to Vapor Solv simple, but it also came with several benefits unseen with the use of TCE.

First, there are the environmental advantages for the company, as it is now ahead of the curve with EPA regulations, which is extremely critical for Electro-Spec living up to its environmental excellence standard. This, in turn, also benefits the company’s employees and environment: the new material is non-hazardous, non-flammable and non-carcinogenic.

Also, the new material is much less susceptible to moisture. “If moisture does occur—which it doesn’t—we don’t have to run an acid acceptance test periodically or as frequently as we do the prior material,” Mr. McKnight says.

Electro-Spec is also experiencing energy and cost savings. The new solvent runs at a cooler temperature inside the degreasing system, which saves energy. Since the old material demanded recharging or changing out, it saves money for the company as well as manpower. “We hope to go three to five years using the new material,” Mr. McKnight says. He adds because the new material is not hazardous, freight cost coming in is less expensive. “And we hope it will be the same on the way out of our facility,” he adds.

The two companies are also working in Electro-Spec’s lab together, doing real-world testing, to create the next generation of solvents.

Electro-Spec is seeing benefits from this partnership, and the company is giving back to BHC for its helpful customer support by offering its lab for further testing. “We don’t have SEM/EDX capabilities at BHC, so Ben and I have an agreement to share the resources,” Dr. Zhang says. “He has graciously let us use 80 hours of instrument time to do some work together.”

Electro-Spec is also giving BHC all the data that is coming off of its testing equipment. “With our SEM/EDX capability, we are able to see if there are any defects that come about, but I don’t foresee that ever happening,” Mr. McKnight says. “I think we will be fine. BHC is going to test the solution for us periodically.”

The two companies are also working in Electro-Spec’s lab together, doing real-world testing, to create the next generation of solvents.

After solving one issue, the partnership is already moving on to create what it anticipates will be the next generation of solvents: non-chlorinated solvents. “The EPA will not allow chlorinated solvents in the next 10 years,” Mr. McKnight says. “The next generation of solvents will have a lower global warming potential. This one doesn’t have a high one, but it will improve even more for the next solvents.”

Because of its strong partnership with BHC, Electro-Spec has gained much more than the benefits of a greener solvent to use in its vacuum vapor degreasing system. It has also gained the customer support that goes along with the new material as well as a say in developing the next generation of solvent that will eventually influence the entire parts cleaning industry. And BHC is gaining material testing ability in its customer’s lab as well as valuable customer feedback it is using to design the best possible solvents. The companies’ collaboration has created good “chemistry” in all aspects of the word.

“We are so glad to be able to help a client that is so close in proximity, and they are enjoying our chemistry,” Dr. Zhang says.